Adapted from a 1959 TV mini-series, The Man Who Finally Died is a competently made early '60s British mystery yarn that draws upon the building blocks of both Cold War espionage thriller and film noir.  Jazz musician Joe Newman (Stanley Baker) gets a call from a German claiming to be Kurt Deutsch, his father who had supposedly died during the war, while in Königsbaden, a town in Bavaria, a hearse bearing the name of "Kurt Deutsch" is shown to be driven over the piazza.  Joe decides to drop in at Königsbaden to find out what the heck is really going on, but is immediately trailed by a cop (Nigel Green), and obstructed by his father's new wife Lisa (Mai Zetterling) and her adviser cum family doctor von Brecht (Peter Cushing). He is convinced that there is a conspiracy afoot, possibly involving the local police, to legally keep Kurt deceased, all the while trying to ship him off somewhere.  He trusts neither Lisa nor von Brecht, and has a tense conversation with the latter regarding the latter's Nazi affiliation.  Is a Neo-Nazi cabal responsible for his father's disappearance?  Or was he a victim of a much more prosaic crime, aimed at collecting one million Deutsch Marks of life insurance payment, as the suave, gun-toting insurance investigator Brenner (Niall MacGinnis, perhaps best known as the evil Dr. Karswell in Curse of the Demon [1957]) tells Joe?

Like the character of Kurt Deutsch, the film changes identity in the latter third, dropping film noir affectations and turning into a more straightforward Cold War thriller, ideologically aligned with the notion of postwar West Germany as a staunch ally of the United Kingdom against the dastardly Soviet Union.  Still, the film maintains a reasonably complex view of major characters: both Cushing and MacGinnis play with audience expectations, keeping us unsure where their real allegiances lie.  Stanley Baker cuts a likeable hero and conveys well the moral conundrum of a man trying to expose the truth but in the process possibly bringing danger to more than one lives, while suitably emotional and bull-headed when required.  The actors playing police are somewhat disadvantaged by their stilted German accent, although the always reliable Nigel Green serves as a nicely droll Greek chorus to the proceedings.

The Man Who Finally Died is filmed in the widescreen ratio by Stephen Dade (Nights of the Round Table [1953]). The iTV stalwart Quentin Lawrence's direction is not terribly dynamic but the scope visuals are otherwise quite attractive. The mono soundtrack features a harpsichord-inflected, effective score composed by Philip Green (one of Basil Dearden's regular collaborators, for instance, in Sapphire [1959]).

Another item in the Studio Canal and Network's British Film series, The Man Who Finally Died seems to have received a brand-new HD transfer.  I am not certain why this particular title has not been issued as a Blu Ray, but the image is sparkling clean, with perhaps a bit of overactive digital cleansing at work and/or boosted contrast.  The details are sharp and black levels are rich and deep.  No CinemaScope distortions are noticeable either.

The audio is also quite good given the inherent limitations, preferring Green's suspenseful music score to the sound effects, some of which (such as the impact of punches thrown by Joe) are not perfectly registered.  The unattractive DVD cover seems to have been cobbled together from elements of the original poster and still photos of Baker and Ward, although the original poster is not something to write home about either.  Rather intelligent if conventional, and buttressed by solid performances by genre experts such as Baker, Cushing, MacGinnis and Green, The Man Who Finally Died is recommended to the fans of classic Cold War/spy films as well as those of the above-mentioned British actors.

I Married an Alien Girl... No, not that kind: UNEARTHLY STRANGER(1963)- Blu Ray Review 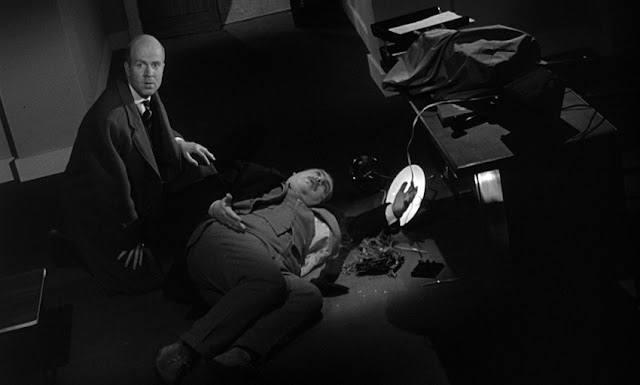 Unearthly Stranger is an interesting low-budget science fiction programmer from early sixties, badly dated in some respects, drawing upon certain types of socio-political anxieties in the British society as it was moving out of the phase of immediate postwar reconstruction and into the era of the Mod and James Bond.  John Neville plays Dr. Davidson, a top scientist in a government research facility that seems to be dabbling in a version of Remote Viewing practices. The science in the film is terrifically confounded rubbish: the British scientists have apparently located an energy source found in human brains that can be reduced to a biochemical (or mathematical?) formula called TP91. In a Richard Matheson-like conceit, TP91 is supposed to allow human minds to engage in an interstellar travel without having to rely on spaceships or other types of hardware.


When Dr. Munro (Warren Mitchell), one of the team members working on the TP91, is found with his brain fried from inside out, a jolly, sweet-toothed national security agent, Major Clarke (Peter Newell, "Mother" from TV's Avengers series), investigates. Meanwhile, Davidson begins to notice strange things about his beautiful Swiss wife, Julie (Gabriella Licudi, who later became a producer after a series of minor roles in TV and films like Casino Royale [1967]): such as the fact that she does not blink her eyes, casually takes out a burning-hot casserole pan from the oven with bare hands, and (in a cheaply done but striking scene) streaks of tears leave furrows in the flesh of her cheeks, as if her face is made out of clay.  Needless to say, Julie is an "alien" in both sense of the word, and she has traveled to Earth precisely using the same method under development by Davidson's team. Severely limited in budget (Dr. Davidson's lab looks like a drab office of any kind, with a few extras seen walking around in white lab coats) and with no scene involving special effects (not even rear projection cinematography), Unearthly Stranger tries to rope us in by mobilizing powers of suggestion and by drenching the film in the atmosphere of paranoia.  From today's perspective, the closest approximation as a viewing experience might be an early season, b & w episode of Avengers (an association strengthened by the presence of Newell), minus the latter's twisted sense of humor.

John Neville (The Adventures of Baron Munchhausen) is an unusual choice for what the script calls for is an intelligent but naïve bookworm, hopelessly in love with his wide-eyed, doe-like wife, even though she had literally dropped into his life out of nowhere. Neville gives a fine performance, but lacks the kind of dashing romanticism that could have brought out the dimensions of sexuality into the fore in Davidson's conjugal relationship. Philip Stone (Indiana Jones and the Temple of Doom) is his square-jawed colleague, and Jean Marsh, one of the essential personages in the history of British SF TV, is his put-upon secretary.

The gender relations in the film are rather fascinating.  Julie makes for an unexpectedly sympathetic alien agent, although infants and children sense something is wrong with her. In one scene, a bunch of school-children simultaneously stop playing and silently gaze at Julie, and then begin retreating in lockstep with one another, but the way it is directed, the expression-less children come off as little Pod People and Julie a normal person, baffled and disturbed that her welcoming smile is returned by dead, cold stares.  In addition, the film throws in a fairly effective yet awfully anti-feminist plot twist at the end, once more connecting it to the Avengers series, this time a disturbingly wacky episode, "How to Succeed… at Murder" (1966), which is admittedly more subtly ambivalent than this film about the rise of the female workforce and what it could mean for the postwar British society. I am not going to divulge the nature of the twist but its gender politics is archaic by today's standard… I am tempted to say "anti-suffragist," yet is historically fascinating for its conflation of the foreign, the female and the insidiously monstrous. This twist comes too late for us to call it one of the film's thematic concerns: had it been fleshed out, Unearthly Stranger would have made a great double bill with Burn, Witch, Burn (1962). 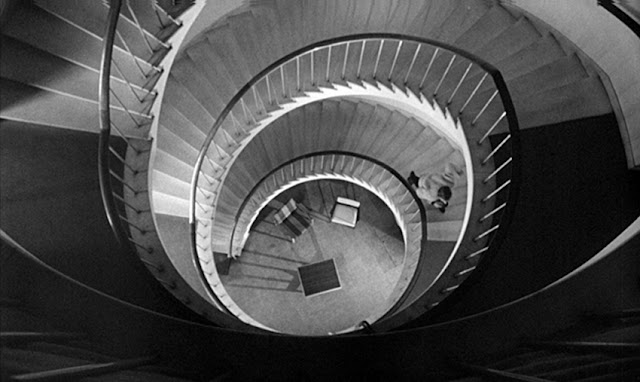 Network and Studio Canal is releasing a bunch of interesting and somewhat obscure SF and other genre films in the Region 2 DVD and Blu Ray market.  I have never heard of Unearthly Stranger before (unlike Amicus Production's Terrornauts which I had enjoyed enormously as a child when it aired at AFKN) so it was a blind buy on my part: while the film is definitely not a classic, I am glad I did.

The transfer of the black and white print, masked at 1.66:1, is not exactly immaculate but is very clean, with suitable levels of depth in dark scenes and appropriate layers of grain.  The audio does not fare as well, sounding rather canned and shrill at the higher pitches.  The dialogue comes off reasonably clear. Network's Blu Ray disc is housed in a super-thin plastic keepcase, which looks rather fragile but is actually helpful in saving shelf space.  Recommended purchase for a serious fan of the pre-Star Wars Anglophone SF cinema.
작성자: Q 시간: 오후 2:56

Starting off A Mirror Site of Q Branch

Hello to those who have been following Koreanfilm.org, or my little blog Q Branch! Sadly, Q Branch is down again with a virus attack.  We are not sure at this point if the existing contents can be saved, but in any case I don't think I will be back there to continue on blogging. Darcy Paquet, the manager of the site, has over the years been very generous with me and have always come through for me whenever it had problems. But after three shut-downs in which most contents up to the incident had been wiped out since I had started there in 2007, I think it is time to move on.

I will temporarily try my luck with Google Blogger platform here. Hopefully more historically meaningful materials at the old Q Branch, including interviews of SF writer John Shirley and reviews of more hard-to-come-by SF and horror films, could be salvaged and archived in one form or another.  I will report the situation here as I find more about what can be done.