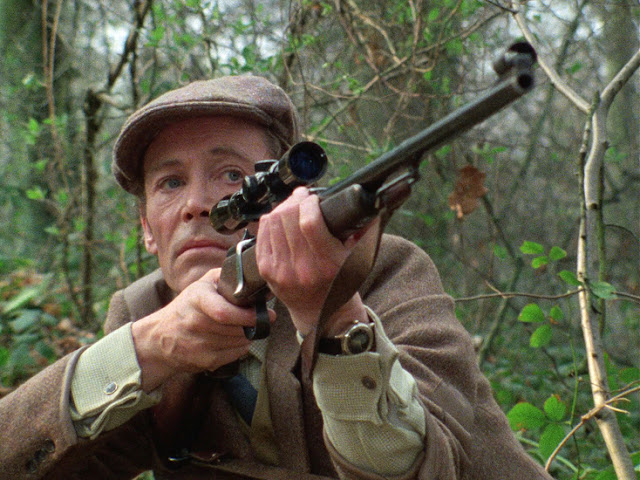 A surprise dual-format release from the BFI, Rogue Male (the intriguing title is apparently a reference to a bull elephant separated from its herd, yet who stalwartly survives, fighting the natural elements) is not so much a remake of Fritz Lang's Man Hunt (1941) as a return to the latter's literary source, Geoffrey Household's popular 1939 novel. Lang's film, despite its overtly propagandistic agenda pushing the US to join the anti-Nazi war, was a superbly crafted espionage thriller, with George Sanders in his best suave, cultured villain mode. Yet, the aggressive Americanization of the film probably departed from the British source novel to such an extent that it might have been unrecognizable for its island fans (as the BBC version's director Clive Donner, mincing few words, points out in the audio interview included herein). Man Hunt not only casts Walter Pigeon in the thoroughly reconceived (de-Anglicized) hero's role and gives him a perky love interest (played by Joan Bennett), but also substantially modifies (softens) its characterizations, for instance turning Vaner, a sailor who helps the protagonist smuggle himself out of Germany, into a young cabin boy (Roddy McDowall). Overall, the older film is much more stylized, taking place in a recognizably Langian paranoid universe in which an ordinary person could be sucked into a whirlpool of political conspiracies, blackmails and street assassinations. Rogue Male, filmed with obviously limited production resources, and admittedly less capable of generating suspense, nonetheless holds its own against the American adaptation, turning its fidelity to the source novel's gruff eccentricity and unadorned brutality into one of its virtues. The appropriate re-adjustment of the film's historical context also yields some additional pleasures.
Rogue Male is quite openly critical of not only Neville Chamberlain's appeasement, which is to be expected, but also the chauvinistic and isolationist mentalities of the British elite society in late '30s (difficult not to notice some eye-rolling parallels with the Brexit in all these). These mentalities are illustrated through Robert's doddering Tory uncle, a funny yet chilling guest turn by Alastair Sim, and John Standing's hissable heavy Quive-Smith, who in this iteration much more specifically portrayed as a British fascist. He has the temerity to lecture Robert about patriotism, hectoring him to do the right thing for the kingdom, which, of course, means an alliance with the Nazis against "the Jews and the n*ggers." Unlike Man Hunt's George Sanders, he never shows up during Robert's interrogation in the introductory section, and probably fancies himself a more proper "British" than a "rogue" like Robert.
For me, however, the biggest surprise among the supporting cast was the Nobel-Prize-winning playwright Harold Pinter as Robert's resourceful solicitor Saul. Pinter brings to his near-stereotypical role of a Jewish lawyer a measure of rueful reflexivity that clearly resonates with the great dramatist's own politics and life experience. 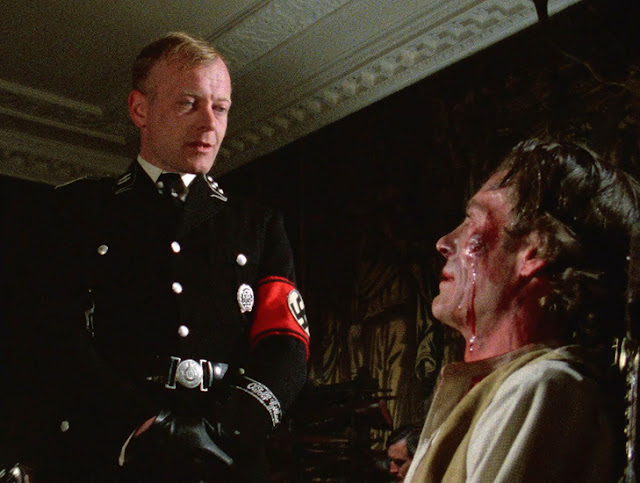 At the center of it all, of course, tensely crouches Peter O'Toole, and he is the main reason, dare I say, that Rogue Male rises above being a competent political thriller and ultimately becomes an emotionally compelling, an almost haunting cinematic experience. His character is named "Robert Hunter," but in the spirit of the Household novel (in which both the protagonist and his dictator target are unnamed), only referred to as "Sir Robert" throughout the present film. O'Toole, with his crane-like, vertical frame, completely dominates all scenes he appears in, and delivers a stunningly sympathetic performance. While some of his line deliveries, especially in the slightly overwritten first third, are doubtlessly arch and theatrical, he manages to convey Robert's desperation, anger, sadness and twinkle-in-the-eye amusement with great economy and precision and a minimum of fuss and tics.
In some ways, the more intimate, claustrophobic screen space of a TV feature allows O'Toole to imbue his characterization with the kind of nuances perhaps easier to get lost in his larger-than-life screen performances. For one, O'Toole's steely gaze in the opening sequence leaves little doubt that he intended to kill Hitler after trying a dry shot. He manages to infuse a powerful sense of humanity and vulnerability into a role that could easily have been insufferable in its tweedy "Britishness" in wrong hands, unfussily communicating to the viewers Robert's internal agony and yearning, and soliciting them to root for his survival and triumph. 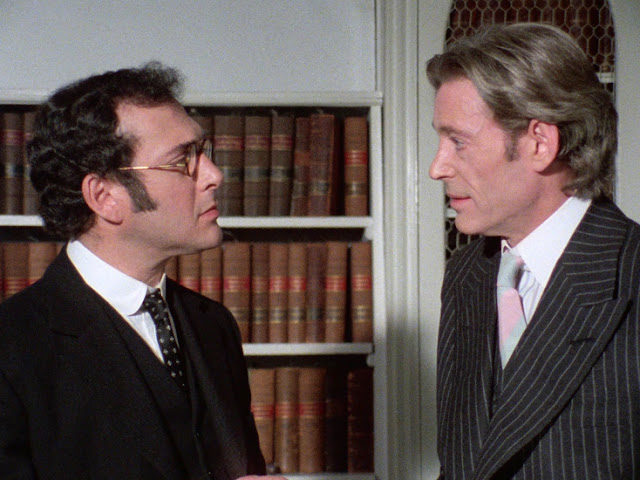 Interestingly, rather than an Everyman hero evincing righteous outrage against the Nazi evil in place of the viewers, O'Toole's Robert remains a true loner to the end. His performance makes it clear that, for Robert, avenging the unjust death of his lover would not be sufficient to integrate him back into the larger society. He appears happiest and most serenely alive when he all but dissolves into the natural landscape of the British countryside, with the black cat Asmodeus as his only companion.
Blu Ray Presentation:
The British Film Institute. Region B. Video: Academy Ratio 1.33:1, 1080p. Audio: PCM Mono 48khz/24-bit. English subtitles. Supplements: Frederic Raphael's The Guardian lecture (1982, audio only), Frederic Raphael interview (2014), Clive Donner on Rogue Male (2018, audio played over stills), Eva Braun home movies (1939), British Union of Fascists March footage (1937), a newsreel on a fox hunt (1921), an illustrated booklet. Street date: January 28, 2019.
The BFI deserves kudos for not only making this wonderful TV film available in a HD disc format, but also going above and beyond their call of duty to stack the package with customarily high-quality supplements. 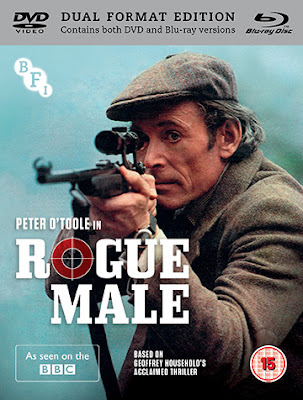 IMDB lists Rogue Male as filmed in 35mm, but the package information makes it clear that the transfer was sourced from a 16mm A+B negative archived in the BBC. The color is vibrant (the tulips in the opening sequence in Germany are scorching scarlet), the contrast levels are excellent, and the high resolution brings out detailed texture from Robert's hunting jacket, among other items. The film stock is extremely grainy, however, especially in the nighttime sequences, so a measure of caution is needed for those more used to the kind of "polished" contemporary looks achieved routinely through digital intermediation. The lossless mono soundtrack is clear and robust, giving a good workout to Christopher Gunning's versatile score.
The longest supplement is the audio-only lecture from the screenwriter Frederic Raphael, an accomplished novelist who also wrote screenplays for such notable motion pictures as John Schlesinger's Far from the Madding Crowd (1967), Stanley Donen's Two for the Road (1967) and Peter Bogdanovich's Daisy Miller (1974). It clocks in 1 hour 12 minutes and can be played in lieu of an audio commentary for the feature. Clive Donner's interview, conducted in 2000 (he passed away in 2010), as indicated above, minces few words in disparaging Man Hunt, although he does reveal that Roddy McDowall at one point wanted to play Vaner's role as an adult in the present version. Raphael returns in a more recent interview (2014), a large chunk of which is devoted to a sort of verbal legerdemain concerning, who else, Harold Pinter, and a rather suspiciously Pinter-esque episode involving whether a line of Saul's dialogue ought to be changed from "What IS wrong with your hands?" to "What's WRONG with your hands?"


Two unexpectedly resonant historical-context supplements are excerpts from Eva Braun's home movies (approximately 7 minutes), somehow appearing slicker and professional movie-like than its recreation in the present film, and a reel of the British Union of Fascist March (about 9 minutes) from Millibank to Bermondsey. The latter, full of eager-beaver white Britishers, men and women, in comfortable, everyday getups, grinning and giving enthusiastic Sieg Heil salutes to the camera, is scored to an eerie, ambient electronic music composed by Chris Zabriskie (aptly titled "Raise Your Hand If You Think Evil is Increasing in This World"). Seeing this mesmerizing newsreel, one cannot help but be reminded of Kevin Brownlow and Andrew Mollo's absolutely frightening It Happened Here (also recently released as a special edition Blu Ray by the BFI), and, once again, of how much the Trumpist-Brexit world of today is in fact a farcical but deadly re-hash of this supposedly bygone era. 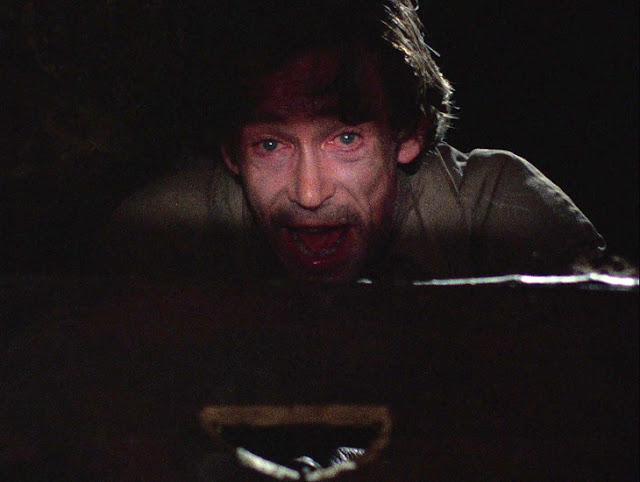 Last but not the least, the Rogue Male special edition comes with the BFI's customarily judicious selection of academic and critical essays. Paul Fairclough sets down a persuasive list of the film's virtues and strengths (although he seems to think Robert's frequent flashback to his romance with Rebecca does not really work). Sarah Wood, in contrast, offers a more formalist reading of the film, focusing on its ambivalent view of nature (and the latter's relationship to man/civilization). Gustav Temple in turn contributes a brief "sartorial perspective" on Robert's attire throughout the film, arguing that wearing other people's clothes and wearing them well distinguishes him as a true (British) gentleman (Hmm…). Finally, David Morrell, an American novelist and the inventor of John Rambo in First Blood, appreciates Geoffrey Household's brutal efficiency as well as his honest approach to violence and human cruelty.
All in all, a first-class presentation by the BFI: here is hoping that more classic TV films from both sides of the Atlantic will turn up as special edition Blu Rays in the near future.
작성자: Q 시간: 오전 12:04 댓글 없음: