This Great Fish Yearns to Swim in the Sky (Actually it's a Dolphin but...) BIG FISH AND BEGONIA (2016)- Blu Ray Review

A long-gestating project for the screenwriter and director team, Liang Xuan and Zhang Chun, Big Fish and Begonia takes its alleged inspiration from the ancient Chinese religious/philosophical text Zhuangzi, specifically the latter's fabulous vision of a gigantic fish, called kun, transforming itself into an even bigger bird peng. Stretching presumably thousands of kilometers in its wingspan, the peng is contrasted in the parable to tiny, infinitesimal creatures such as cicadas and quails, who laugh at sheer absurdity of the scale traversed by the Brobdingnagian aviator. However, Liang and Zhang are seemingly less interested in the Daoist spiritual lessons to be derived from this enigmatic myth, but in the image of a big fish swimming out of the ocean and metamorphosing itself into a bird. They have concocted an impressive array of mythological habitats out of this surrealistic imagery, in which several types of demigods, or in any case, supernatural beings, live and flourish in an ecological system existing coterminous to the "nature" as understood by us humans.

Basically, the heaven/sky of the protagonist Chun's world-- whose tribe might be characterized as, in a Western approximation, "tree witches/faeries"-- constitutes the ocean of the human world. When she turns sixteen, as a part of a ritual initiation to adulthood, Chun transforms herself into a dolphin (in this particular film, porpoises are referred to as "fish:" urr, they are mammals… but never mind) and ventures into the sea of the human world. Unfortunately, she is ensnared in a fisherman's net. She is rescued by a young human boy, Kun, but the latter is tragically drowned in the process. Grief-stricken and driven by a desire to settle her moral debt to the dead boy, she tracks down Kun's spirit: you see, when human beings die, their spirits are "reborn" in her world as fish. With the help of her childhood chum Qiu, Chun bribes the Soul Keeper, a drolly cynical one-eyed ogre, so that she could abscond with Kun in a tiny unicorn fish (dolphin, but never mind) form, with the intent to send him back to the human world. However, the latter grows into an enormous size, and her action ultimately upsets the balance between the two worlds, as the portal opened up to reach the human sea begins to result in cascading of water into her world, threatening to flood it and drown its inhabitants.

Big Fish and Begonia, also incorporating into it various images of ogres, goblins and other fantastic creatures from such ancient texts as Classics of Mountains and Seas (Shanhai-jing) and In Search of the Gods (Soushen-ji), is a very ambitious animated feature, shooting for the rich texture and compelling characterizations of a higher-end Studio Ghibli film. It is certainly a laudable attempt, but is only halfway successful in meeting its goals. The film was a relative financial success in the Chinese domestic market, garnering approximately 85 million dollars during its theatrical run, although critical and audience responses were mixed, some finding in particular its visual elements charming and beguiling, others dismissing it as a pale imitation of the Japanese works of similar stripes.

Visually, Begonia is attractive-looking but never garish, with somewhat subdued color schemes and painterly background renderings. In my view, Zhang and Liang successfully avoid being branded as imitators of Miyazaki Hayao, although the influence of the latter's masterworks, especially Spirited Away, inevitably crops up throughout the film. Character designs are detailed and interesting: Soul Keeper nonchalantly picks legs off a stick-like bug, which then he proceeds to smoke like a cigarette: a stone lion might suddenly address Chun in a harsh yet not unkind voice. Rat Matron, a frothy, decadent and vaguely sexualized figure, suggests an inkling of burlesque performance tradition that perhaps could only be depicted as an animated semi-villain under the current Chinese censorship.

The main problem with Begonia, and perhaps one that prevents it from becoming a modern classic, is the overly archetypal, sometimes unimaginative, characterizations of the main protagonists. For one, Chun is altogether too willful, too single-minded, the texture of her character dominated by her determination to "save" Kun. Kun in turn loiters around for the most of the film in the form of a soulful-eyed, handsome dolphin/fish: this has the effect of making Chun's devotion seem at times like petulant unwillingness to let go of an overgrown pet, rather than a serious moral decision. Curiously, the filmmakers toys with but never commits themselves to the idea of romantic destiny binding these two youngsters, who never meet in the human form until the denouement (a la Ladyhawke): when they actually do, there is little romantic/erotic spark despite all that they had to go through together, including a near-annihilation of Chun's world (Both Kun and Chun's nudities are carefully sanitized as well, the former missing genitalia, but I suppose that is par for a Chinese feature intended to appeal to the youth demographic). Some striking supporting characters, such as Deer God who moonlights as a bar host (?), also regrettably remain underused.

Begonia is truly impressive in its ability to convey the cosmic scale of the narrative, in which multiple worlds co-exist with one another, divided by imperfectly defined, porous boundaries. What Zhang and Liang need to work on for their subsequent project, is refinement of their characters and plot. The best Pixar-Disney (or Miyazaki) characters, and the narratives they are incorporated into, are never as ponderously archetypal as they might appear at the outset: they are often surprisingly complex, and must reconcile different, sometimes conflicting drives that propel the stories in which they are protagonists. It is not as easy as it seems, either, to thread together the standard fairy-tale trope of a boy and a girl meeting and falling in love with one another, on the one hand, and the kind of momentous ethical dilemmas actually faced by Chun in the film, on the other, into a coherent whole. These are the things to ponder for the young, ambitious creative talents whose major achievements are still to be made in the future. 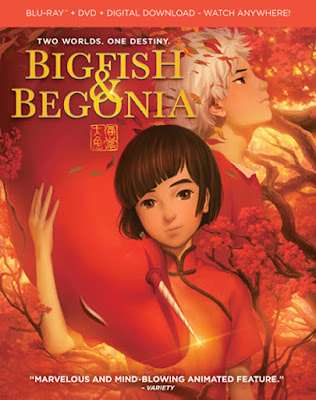 The U.S. physical media distribution of Big Fish and Begonia is handled by Shout! Factory. The company, per their usual enthusiastic stewardship of genre cinema, has put together a dual-disc (Blu Ray and DVD) special edition, with an attractive slipcase design. The transfer qualities are, as expected, excellent, seamlessly capturing the 3D graphic dynamism integrated with the more static backgrounds and 2D renderings of the characters. The audio defaults to English: the voice actors are a tad more conventionally emotive than the cast in the Chinese track (which seems to include a few seasoned Taiwanese actors). Even though the Cantonese voice track data are available online, the current Blu Ray only includes the Mandarin one.

The making-of documentary (23 minutes 48 seconds) is thankfully not a Hong Kong-style jittery EPK material but a rather fascinating chronicle of Zhang and Liang's joint effort to launch a major animated feature film for twelve years, since they had formed a partnership as Tsinghua University undergraduates. The story turns unexpectedly grueling and touching, as lack of confidence in a domestically produced animated feature resulted in chronic deficiency in financing, eventually forcing Zhang/Liang's company Bian Tian Culture to turn toward video game design and file bankruptcy in 2012 (Zhang breaks down and weeps as he recalls having to disband the production team who had worked together for nearly a decade). Then, nearly as the last resort, they put an advertisement in Weibo (a popular social media site) and started a crowdfunding campaign, to which ultimately 27 million Chinese-- mostly younger generation film fans-- managed to contribute (according to the interviews, one person "donated" one month worth of his salary, and another newlywed couple the entirety of their marriage "dowry"), allowing the filmmakers to relaunch production (the docu does not hide the fact that, due to the constant production delays, there was some backlash against the filmmakers among the fundraisers).

There are fascinating cultural details in this real-life story, such as the absolutely critical presence of "Auntie" Liu, whose official position in the company was the caterer/chef but was clearly a far more important figure, a den mother to the overwhelmingly youthful production crew, and the essentially makeshift, hand-crafted nature of the production (basically a group of young guys and gals doing all-night shifts days on end, perpetually looking into a dozen computer screens, often sacrificing personal time, such as one set aside to meet their family members). The docu clearly shows that the Bian Tian Culture could not have afforded, even if it had wanted to, the "luxury" of spending valuable time and money to the R&D of story and characters, the way Pixar and other big American studios routinely do. This making-of docu is a valuable archival data for a future cultural historian charting the course of feature animation production in early 21st century China.
The disc also includes the 8-minute short film "Big Fish and Chinese Flowering Crabapple," that served as a prototype for the feature, presented in SD quality. It is much more lyrical and melancholier than the latter, with non-realistic, stylized figures and more grounded in contemporary, urban sensibility. It also has a nice stinger of a surprise ending that would only work in a short film format. Although technically crude, the short has merits of its own, distinct from the feature that it ultimately evolved into.

Can we use it in class? Beautiful and even moving as it is, I don’t think Big Fish and Begonia could be an appropriate material for introducing Zhuangzi or other texts of ancient Chinese philosophy/mythology to North American undergraduates. Zhang and Liang are more interested in creating their own fantasy world than providing interpretations of the original parable about the kun fish. The film is probably more useful for a cinema or popular culture studies course, specifically addressing the question of the positionality of constructed-world fantasies among popular media products currently made in East Asia, especially China. Having said this, I do believe Begonia does provide an interesting contemporary text through which we could examine various tropes and ideas associated with traditional Chinese culture-- the notions of seasonal change and life-cycle, the ocean rather than the heaven as a territory of human souls, and so on--, although, as with Spirited Away, the film probably reflects deliberate cultural eclecticism on the part of the filmmakers, and therefore caution should be applied in denoting what appear to be "exotic" to the North American eyes as automatically "Chinese."
작성자: Q 시간: 오후 9:24 댓글 없음: