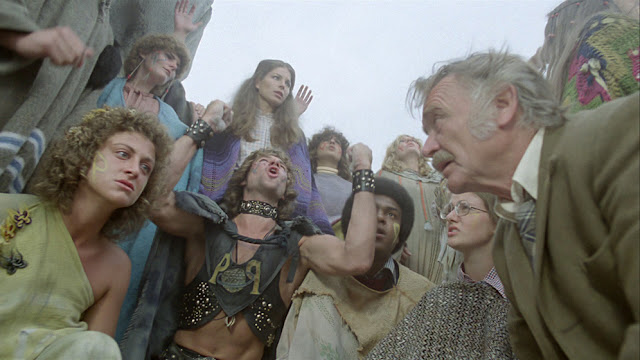 Bernard Quatermass, Nigel Kneale's pioneering scientist-hero of the British science fiction TV and cinema, returns for the last mission of his life, in the manner of Hercules Poirot in Agatha Christie's Curtains (1975). Having missed the mini-series's (a format extremely popular in late '70s and '80s, as I recall) stateside broadcast, I have only known it in its theatrical release format, The Quatermass Conclusion, until the new century. With the advent of the DVD, A&E managed to release the original miniseries in 2005, bringing both editions together into one handy collection. However, despite A&E's then-exemplary presentation, the series, like many classic British television shows, benefits tremendously in visual terms from a new HD transfer, as attested by Network's new Blu Ray presentation.


Quatermass, played by different actors every time he was called in to battle the alien menace (six in all, not including the youthful Jason Flemyng in the rather pointless BBC remake of Quatermass and the Pit [2005]), is a unique SF protagonist in the annals of TV science fiction, with the direct, personal connection to the early postwar space program but also sharing some qualities with Lovecraftian protagonists like Charles Dexter Ward, lifters of the veil, so to speak, who gets to observe, as a vanguard of the mankind, the true horrors lurking behind the glittering stars in the night sky. In Hammer Film's superb early film versions, shot through with a terrific feeling of cosmic dread and paranoia-- The Quatermass Xperiment (1955) and Quatermass 2 (1957)-- he was played by the American actor Brian Donlevy, whose hard-boiled and irascible, almost ruthless, interpretation of the character brought an intriguing film noir inflection to the proceedings, something probably never intended by Kneale. In Quatermass and the Pit (1967), Andrew Keir was a much warmer and approachable Quatermass, but that film's real hero was actually his idealistic colleague Dr. Roney (memorably essayed by James Donald), consigning the nominal hero into the role of an observer/narrator of the fantastic events rather than a man of action. 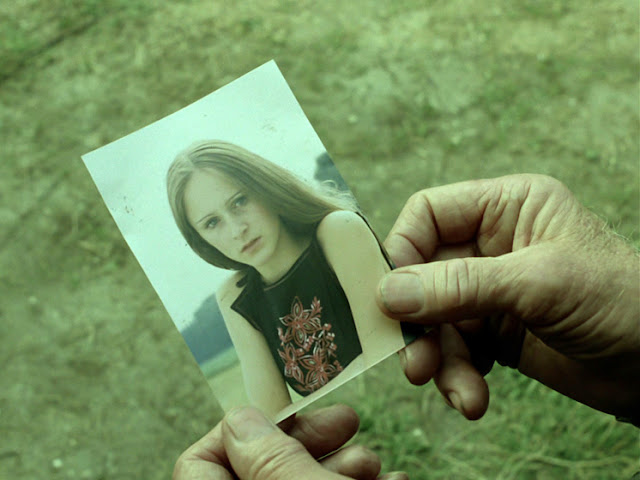 This mini-series cast the great star of early postwar British cinema John Mills (winner of the supporting Oscar for Ryan's Daughter [1968] but best known for such mid-century mainstream UK hits as The Colditz Story, The Great Expectations and I Was Monty's Double) as Quatermass, and he brings sophisticated shadings of tragic alienation and compassionate intelligence to the battle-scarred scientist.  Appropriate for a pop culture diagnosis of the global '70s-'80s transition, Quatermass puts the eponymous scientist right in the middle of a global apocalypse, a nightmare of '60s style social liberalism and '70s OPEC-era political pessimism run amuck. The streets are overrun by hideously color-coordinated gangs armed with sub-machine guns and grenades. Hippies calling themselves "Planet People" inarticulately chant about traveling to the outer space and gather together at the local prehistoric stone circles to summon the alien guidance. Quatermass's own granddaughter, the only surviving family member of his, has joined the Planet People cult. Their aggressive antics are in turn confronted by a thuggish police force with no qualms about using brutish tactics. 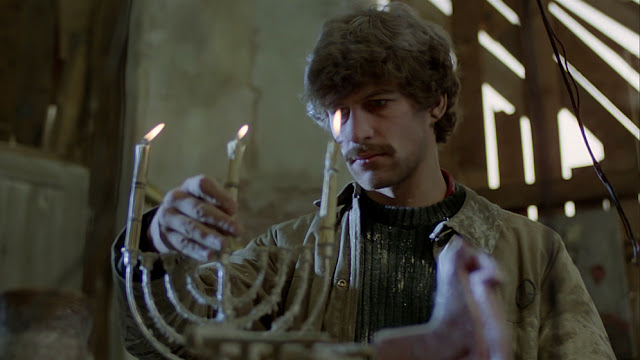 The deteriorating social order and degeneration of culture are displayed for the viewers through a rather ironic device of imbecilic TV programs produced by a BBC-like station that invites Quatermass to confer about the US-Soviet joint space station venture. When the space station is spectacularly destroyed live on satellite broadcast, our heroes become aware of an extraterrestrial threat. The old Dr. Q, despairing to the point of abandoning all hope for the mankind, manages to connect with the younger astrophysicist Joe Kapp (Simon MacCorkindale) whose pronounced Jewish heritage and devotion to his wife and daughters serve as an entry point to Neale's somewhat heavy-handed illustration of the global Zeitgeist slipping back into a form of collective mindlessness.


Neale's teleplay is intelligent if cynical and manages to generate an impressive amount of suspense with little time wasted. He does not need voiceover narrations or long expository dialogues to explain how the world civilization had rapidly gone to seed. His ideological position here is not conservative in the usual Tory sense of the term (and he is hardly the only British writer of the last century to assume that the "civilized world" in essence contains only white people… with the membership for the enlightened extended to Jews and maybe some Russians. Oh, David Yip [View to a Kill] is a lone Asian scientist in Kapp's astronomy lab team, I shan't forget to mention!), but it is clear that he carries a lot of distaste for the promiscuous and superficial aspects of '60s British culture (not that surprising, considering that he is the mastermind behind the aptly prophetic The Year of the Sex Olympics [1968]). Sometimes Quatermass evokes the sense of a curmudgeonly disapproval from an old man who has seen better times, especially during the chapter in which Quatermass is rescued and helped by a community of elderly squatters. When the young people are uniformly portrayed as stupid and savage, whilst the old people gentle and reasonable, I wonder whether there is any way to call such a view other than "conservative." 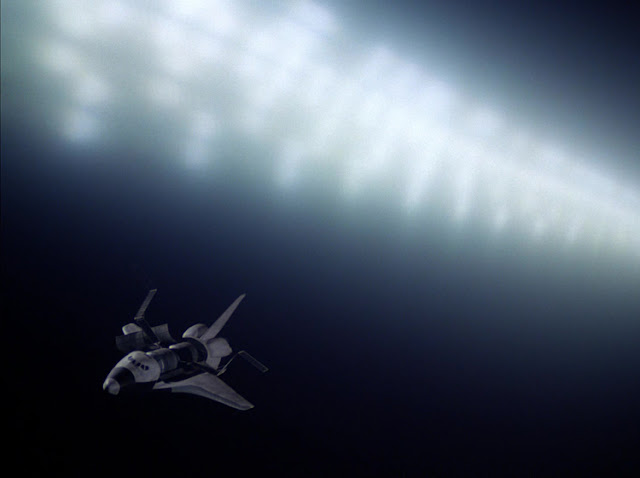 Thankfully, Kneale, or perhaps director Piers Haggard (responsible for the cult horror film The Blood on Satan's Claw [1971]), restrains the urge to deliver position speeches and keeps the core appeal of the series alive, that is, its cosmic SF monsters that properly "puts the mankind in its place" in the great food chain of the universe. Quatermass demonstrates that, to the inscrutable Lovecraftian alien beings, we earthlings are no more than livestock with exotic flavors, not even worthy of being directly manhandled by them, but only fit to be anonymously mass slaughtered via a column of energy beam that reduces human bodies into clumps of white ash (another possible reference to the Holocaust, the idea also picked up by Steven Spielberg in his masterly War of the Worlds). This depiction of the "harvesting" of earthlings is downright chilling despite its minimalist special effects. MacCorkindale, at other times blustery and overacting, is quite effective here as a decent man of science who becomes nearly as unhinged as his adversaries due to the personal devastation visited on him. Indeed, Quatermass is infused with an unusually somber mood, almost a tone of bereavement, which might in turn lead some viewers to conclude that the series is too dour to be truly compelling.


Nonetheless, as a work of "hard" science fiction with sharply honed dystopian edges, the series maintains its integrity and dignity. Yes, its "Planet People" sequences are sometimes borderline ridiculous, especially now that we all know what subsequently transpired under the Thatcher/Reagan '80s, but I can at least respect its point of view articulating the apocalyptic anxieties that had gripped the older-generation Euro-American intelligentsia in late '70s. 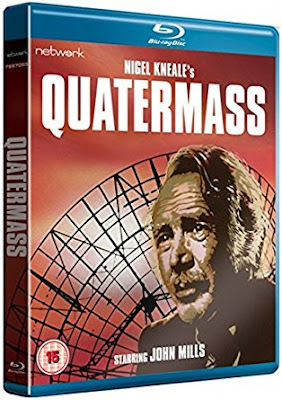 Networks's packaging of Quatermass Blu Ray puts all four episodes in the first disc and The Quatermass Conclusion in the second. The theatrical release version is not simply a truncated version of the mini-series, and puts a slightly different spin on characters and events, with interesting results. To cite an example, the character arc of the lone survivor of the Ringstone Round (a smaller-scale Stonehenge of sorts) "contact," Isabel (Annabelle Lanyon), is notably different in two versions. In the mini-series, she stumbles out from behind the rock on her own, but in the movie version she is discovered by Quatermass while lying supine and dazed. Her final fate takes place somewhat anticlimactically in the mini-series, but in the movie version it is one of the more shocking moments directly witnessed by the rocket scientist (in the mini-series he never gets reconnected to the Isabel thread again, except presumably in the form of an off-screen after-the-fact report). Likewise, an entire section in Chapter 3, in which Quatermass is nursed back to health by a group of elderly squatters, is excised from the theatrical version. In the latter, he simply does not get separated from Anne Morgan.


As I have mentioned above, I have watched The Quatermass Conclusion many years before I had a chance to lay my eyes on the mini-series, so that is the version that I am used to seeing. The video presentations also slightly favor the widescreen format, although the HD encoding greatly improves the experience of watching the mini-series as well. As Kneale himself noted with approval, Euston and Thames TV production, unlike BBC (think of Dr. Who), eschewed studio-bound sets and filmed as much action in outdoor locations as they could, and with 35mm film elements, which allowed for it to become a major beneficiary of a new HD scan. Overall, the color scheme appears to me slightly redder and the contrast darker in the theatrical version, but no huge divergences are noticed.

This Blu Ray package does not contain one of the DVD extras from the A&E package, a documentary on the Stonehenge, but it is not missed. As is usual with Network, the insert booklet essay by a Dr. Who specialist Andrew Pixley is an exhaustively researched, archival piece with tons of quotes from Nigel Kneale.  It mostly details production history, why it had taken the good chunk of '70s for the project to actually get made, how Hammer Films almost got hold of it before losing out to Euston and Thames TV, how much it cost (about £300,000 per episode, quite high-end for the time), Kneale's subsequent unhappiness with the production, especially its casting choices, as he found Mills too soft and grandfatherly, MacCorkindale too unintelligent-looking, and so on (it is understandable but unfortunate that Kneale is like a lot of "hard" SF writers in insisting that his scientist hero remain a sort of Platonic superman, as if academic intelligence is panacea for all problems confronted by a literary character), and other nuggets of information. One interesting critique Kneale advanced and quoted by Pixely is that his original conceptualization of the Planet People was not successfully translated onscreen: apparently his take was a lot more dangerous and futuristic, a "sort of cross between super-punks and whirling dervishes." Perhaps his original version, while still firmly rooted in the anti-'60s mentality, did look forward to the cyberpunk trend just coming up in the horizon.

The venerable creator's less-than enthusiastic evaluation aside, having re-visited the Bernard Quatermass in the superlative Blu Ray format, I found both mini-series and the film thoughtful, thrilling and even a little moving: living up to the mantle of a quality hard science fiction, unflinchingly taking the unpopular (again, Lovecraftian) view that God out there cares naught about us except as resources to be exploited. We are the little silkworms of the dark universe, who get boiled to death as we surrender our cocoons, from which the harvesters pick out threads of beautiful silk. Given our own propensity for indifference and exploitation toward other species on our planet, could we truly expect anything better from the advanced species out there?


The Network Blu Ray of Quatermass is highly recommended to the fans of British Cinema and hard science fiction, despite its admittedly misanthropic tone.