This review has been requested by Knox, one of the readers of M's Desk. The content will be replicated in my M's Desk webpage. 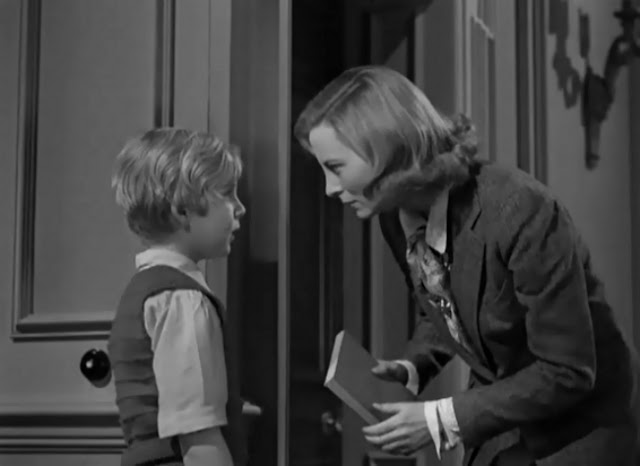 Carol Reed (1906-1976), a well-honored Englishman whose directorial career traversed the fledgling British film industry in the prewar era and its '50s and '60s glory days, is nonetheless often cited as a journeyman director, a mere "good storyteller" devoid of his own style or serious stakes in the cinematic medium, especially during the height of the auteurist critical trend driven by the international successes of the French nouvelle vague. Perhaps most famous for directing The Third Man (1949), his own contribution to that seminal postwar thriller has often been overshadowed by that of its flamboyant star Orson Welles, and, to a lesser degree, by that of its screenwriter Graham Greene. Reed, a notoriously generous director with many episodes indicating his gentle approach to the filmmaking process (the current Blu Ray supplements repeat some of these anecdotes, including his advice to a novice director, "Never humiliate an actor"), has not surprisingly received a surge of counter-auteurist critical support in recent years, as more formalist and genre-conscious film criticisms have come to appreciate the native Londoner's delicate yet firm control over the entire filmmaking process. And after so many movies have come and gone, an ability to tell crackling good stories on screen no longer appears so easy today, as it must have been to the Young Turk cineastes of '60s.

The Fallen Idol, usually discussed in conjunction with Reed's two other masterpieces from the immediate postwar period, The Odd Man Out (1947) and the aforementioned The Third Man, is deceptively simple-looking motion picture, tightly controlled and "engineered," yet giving the illusion of a fully naturalistic, opened-up world to the first-time viewer. Its moral concerns are also a lot more ambivalent and complex than it appears at the outset. When I had first seen it at the Cambridge, MA's Brattle Theater sometime in '80s, I immediately became immersed in it as a intelligently constructed mystery film, that, like the best of the Italian gialli made twenty years later, hinges on the misinformation conveyed through the act of seeing (and believing wrongly that one had seen something, when he/she in fact had not). It appealed to me as the type of boardroom thriller that the British were typecast for doing a great job with. Only after multiple viewings spread over more than three decades, I came to realize that the film is much more than a mere thriller, overlain with complex psychological dynamics, and suffused with a highly compassionate sensibility that could have only come from a generation that had reflected hard on the cruelties and absurdities of a devastating war.

One of the standard interpretations of the film, that this is a well-told story of a young boy being forced into adulthood, a variant of Bildungsroman, has never really worked that well for me. I have always found it exceedingly difficult to identify with the little Philipe, the eight-year-old French Ambassador's son who idolizes the Embassy's butler, Baines, who is carrying out an extramarital affair with a beautiful French typist, Julie, right under the nose of Mrs. Baines, a vindictive and disciplining authority figure for the kid. Perhaps because I have since a very young age always been so easily seduced by the great yet subtle acting, the pretend-games these marvelous British actors play, every time I have seen The Fallen Idol my focus is inexorably drawn to Baines. When he is so pathetically and, in my view as an empathetic viewer, so unjustly reduced to his "real" self in the second half, my heart unfailingly goes out to him.

Indeed, from my POV the film leans toward Baines's story of coming to terms with the lies, not just the "innocent" ones such as tall tales he has been regaling to the boy, but the much darker and despairing truths hidden beneath them, beginning with one that his marriage has become an empty husk, and more importantly, that he is too much of a weakling to dismantle or, conversely, save it. Philipe is a catalyst, or a lens through which he is now finally able to see what an untruthful life he has led so far. Baines is at his heart a kind, considerate man, but he shares certain qualities with an archetypical film noir protagonist: he lets himself become a victim of circumstances by refusing to take control of the trajectory of his life. Although Julie is far from a femme fatale, her encounters with Baines are swathed in the anxious atmosphere of deception and suppression, which perhaps for Philipe, and for the audience, stokes the flames of romantic allure. We are drawn to these pretend-plays knowing that they cannot end well. 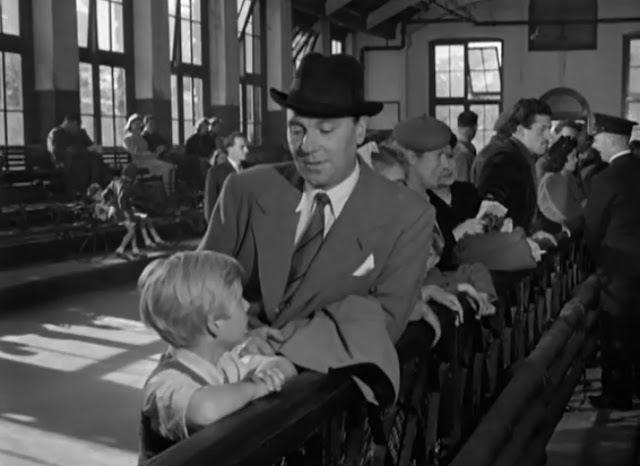 The Fallen Idol in my opinion is a premier example of a work of classic cinema that deceptively assumes the guise of a play, yet enriched by meticulously thought-out application of cinematic techniques. There is a sense of an exquisitely designed, invented world, halfway between a child's imaginary castle and an aristocratic abode, no doubt abetted by Vincent Korda's grandiose artistry, matched by terrific dynamism of the camera (masterminded by Geroge Périnal, René Clair and Jean Gremillon's prewar partner-- it is easy for us to forget that a British film like The Fallen Idol was in fact put together by a multicultural, multilinguistic crew and cast, including French, Hungarian, German and Czechoslovakian talents) and, of course, the kind of cinematic performances cued toward the discerning eye of the camera and the editor's rhythm rather than the paying audience seated in the front row.

Bobby Henrey, a non-actor who was largely cast because, like Philipe, he had grown up in France and was capable of speaking English with a French accent, apparently had to be cooed, cajoled and at one point bribed (via a conjurer's tricks) into giving the reaction that Reed wanted. Yet, the end result is completely natural performance, including the shots showing uncomprehending terror (this could not have been easy on his or Reed's part). Henrey's performance is fascinatingly un-self-conscious, quite unlike great performances given by professionally trained child actors, for instance, Mark Lester in Reed's own Oliver! (1968): a closest corollary to Henrey's performance I could think of is the one delivered by Kelly Reno in The Black Stallion (1979).

However, for me, The Fallen Idol is really dominated by Ralph Richardson. It is truly remarkable that three of the British theater's greatest twentieth-century actors, John Gielgud, Laurence Oliver and Richardson, had such a long and distinguished career as film actors as well (There were those theater giants whose cinematic sojourn was relatively minor, such as Paul Scofield). Richardson had a singularly productive relationship with Alexander Korda throughout '30s and again this might have extended to his casting as Baines in The Fallen Idol, a production that can be characterized in a way as Korda's way of enlisting Greene as a reliable source for his films. While he could definitely have dialed up the impish, even slightly sinister side of Baines, Richardson eschews easy theatrics and provides a strikingly restrained performance, a textbook showcase of "less is more:" it is a thoroughly cinematic turn, not relying on the Old Vic director's oratorical skills at all, conveying so much through delicate facial expressions and rigid postures rather than "acting" as such.
The Fallen Idol is not exactly a neglected gem: it was both a commercial and critical hit upon its release, and has continued to claim a honored position in the postwar British cinema (it was not imported to Japan until 1953, beating The Quiet Man, Shane and The Sound Barrier to claim the rank of no. 4 among foreign imports in the year's prestigious Kinema junpo list). Yet due to its small scale and the plot that easily renders itself to simplification, one could lose sight of the degree to which the film's "simple" qualities are in fact a reflection of superlatively fine-honed filmmaking artistry, both in front of and behind the camera. It is a classic motion picture not bound to its particular era or milieu, capable of touching and shaking us beyond generational and cultural divides. 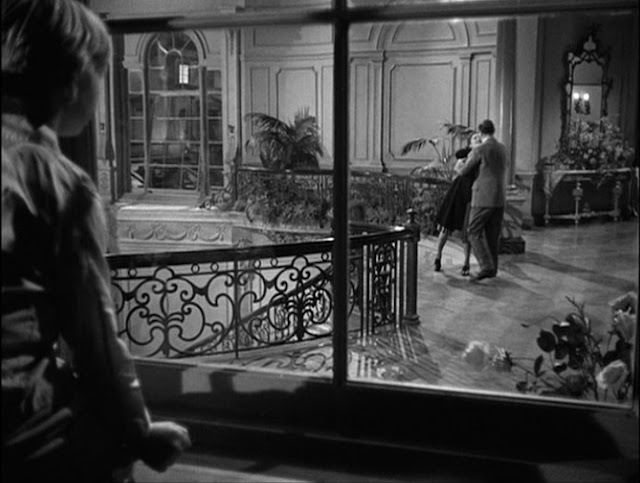 The Fallen Idol has previously been released as a Criterion DVD and is possibly geared for a Blu Ray update in the near future (Odd Man Out is already out) but this Blu Ray edition is the Region B version put out by the British Film Institute in conjunction with Studio Canal. The film has been restored by the BFI (I assume it is 2K remaster), cleaning up a large chunk of debris, nicks and scratches, but not all to the point it became waxy and featureless. There is a healthy layer of grain especially in the outdoor shots, and the black levels are sharp but stable. There has apparently been some vertical stretches due to encoding problems in early copies, but as of June 30, 2016, this problem seems to have been addressed. Overall it is a sparkling restoration that does the film's classic status justice. The lossless digital mono soundtrack is also uniformly of high quality. Only English subtitles are included.

The BFI has arranged a nice array of extras for the film. Assistant director Guy Hamilton gives a nice overview of the production process, focusing on Carol Reed's directorial style, generating a bit of controversy perhaps by commenting that Bobby Henrey's attention span was that of a "demented flea." Surprisingly, Bobby Henrey, now an octogenarian old gentleman, gives a game interview discussing his experience (he does not quite deny Hamilton's characterization of himself as lacking in attentiveness, although he comes across quite a bit more thoughtful in his own words). Both interviews are very informative and clocks around at 16 and 18 minutes. In a separate interview (appx. 20 minutes) Charles Drazin discusses the production background from the angle of Graham Green and Alexander Korda's participations. Young director Richard Ayoade (The Double) expresses his admiration for the film in question and especially Carol Reed's approach to acting. I sometimes find a fellow filmmaker's tribute to a classic film largely perfunctory or tangential, but Ayoade makes an excellent case for Reed's directorial skills and soundness of the latter's approach, especially his determination to have every character-- no matter how minor-- to "fully speak for him or herself" throughout the film. The supplements are rounded out by a brief restoration comparison and Ryan Gilbey's rather substantial booklet essay, which should not be read prior to watching the film, as it is full of spoilers.  As I have stated above, Criterion might issue its own Region A blu ray of this film in the near future, so it is up to you to stick out for it, but if you have a region free or region B-exclusive machine, I can vouch for the high quality of the BFI-Studio Canal presentation of this exceedingly well-crafted little cinematic gem.