In conjunction with the revitalization of K-pop (it is sometimes spelled "k-pop" but, like Germans, I prefer capitalization for country and regional names, so I will stick by K-pop) music video reviews for Koreanfilm.org, I am uploading a brief piece of (re)introduction, mostly catching up with the (for the fans and industry folks) super-exciting development of the last three years or so. It is not meant to be an academic history of the K-pop in the last half-decade, but a rambling thought piece, from a very subjective viewpoint of a "386 generation" Korean academic teaching Japanese and Korean history and culture in a California public university.

As most of you reading this would know very well by now, K-pop has had its moments of unprecedented global recognition, especially in the US, long considered to be the toughest market to infiltrate, in the last two years or so. For many years, it was the girl groups-- Wonder Girls, Girl's Generation and most notably 2NE1-- who had their turns in trying to penetrate the mainstream US market.  Even though Wonder Girl's "Nobody" did show up in Billboard Hot 100 at the 76 rank in 2009, and 2NE1, managed by the California-based Live Nation, did pull off a well-attended and well-reviewed world tour, stopping over at key American cities in 2012, they did not quite succeed in fulfilling their goals.  Sadly, 2NE1, who many critics agreed were the most likely candidate for breaking into the US market, was crippled by its host company YG's mishandling of an alleged scandal for one of its members, Park Bom, and the subsequent defection of another member, Gong Minzy, leading to its disbandment in 2015. It must be said that YG's Big Bang and 2NE1 were, among the so-called second generation K-pop idols, key recognition figures for a large number of non-Asian fans.  You can read many testimonies in the internet about how these two groups-- and their iconoclastic music videos such as BB's "Fantastic Baby" and 2NE1's "I am the Best"-- constituted their first serious exposure to the K-pop as we understand it today.

Of course, we should not forget Psy and his "Gangnam Style," which in retrospect was a one-shot wonder more like "Macarena" than a meaningful exposure to the Korean style of pop music, but its prodigious popularity did contribute to the possibility of a Korean musical artist hawking his wares to the world without having to significantly alter his identity. Psy's song was mostly in Korean, and his in-jokes about the "South of River (Gangnam)" region of Seoul were difficult to fully understand unless you were a Korean. But in the case of "Gangnam Style's" gargantuan popularity, these factors really did not seem to matter.

The Gangnam Style phenomenon also pointed to the rising power of YouTube and viral communication in the internet. The K-pop fandom continued to grow, and despite lack of representation in the American mainstream news media, including radio and TV, the fans continued to support K-pop artists through clicking on the YouTube MV play and "like" buttons, circulating and sharing information on social media, and downloading and streaming their music in the then-non-traditional and up-and-coming venues such as iTunes and Spotify.  As is well documented by scholars and industry analysts, the current rulers of K-pop, Bangtan Sonyeondan (Bulletproof Boys) or BTS, turned out to be the premier beneficiary of this new global trend in music consumption.

-- A happy crowd gathered at the 2019 K-Con, Prudential Center, New York City. This massive convention of K-pop, this year held again in LA, is ironically (actually not ironical at all) sponsored by Toyota.

Of course, this is not to say the boys had it easy: far from it.  Originally considered a second-tier boy group from a small production company Big Hit (overshadowed by the three giants, YG, JYP and SM), BTS has persisted since their debut in 2013, interweaving their adolescent anger against the hypocrisies of the adult Korean society, and later their own self-doubt and anxiety as a flock of fledgling idols, into their music and videos, keeping their social media presence (including their V-live video logs of their daily lives) afloat, diligently and warmly reaching out to their fandom, called ARMY, whenever possible, and, perhaps most importantly, remaining independent artists in spirit and practice, refusing to bow down to the prospective committee decisions about their future direction, such as, for example, how to appeal to the English-speaking viewers. Although RM, a.k.a. Kim Nam-joon, the leader of BTS, has an extremely impressive command of English (check out his stirringly poetic yet beautifully streamlined English-language speech delivered at the United Nations in September 2018, as a part of UNICEF's Generation Unlimited initiative), the group has not really consciously "adapted" themselves to the US "standards," whatever they might be.

All this, again as many of you already know, culminated in the BTS's three consecutively released albums, Love Yourself: Tear, Love Yourself: Answer and Map of the Soul: Persona topping the Billboard 200 chart in less than eleven months-- a feat previously achieved by none other than, and no one other than, the Beatles. At this point, one is compelled to acknowledge either that BTS is as "mainstream" among Americans as Taylor Swift or Justin Bieber, or that ARMY's power is simply unparalleled in the history of popular entertainment known to the mankind. Either way, it is an unprecedented situation for the Korean culture in the entirety of the nation's history.

Already we are passing through the halfway point of 2019, and quite a few K-pop groups-- Blackpink from YG, NCT from SM, TWICE from JYP, all one might be able to call "upgraded versions" of their companies' previously popular groups, not to mention notable crews and bands such as Monsta X, K.A.R.D. and GOT7 are at this moment eagerly sprinting on the paths blazed by BTS (and, before them, by Wonder Girls, 2NE1 and others) and poised to make their names known to the ever-expanding global audiences/viewers, now including super-enthusiastic already-converted-fans of the United States, thinking nothing of scream-chanting entire Korean-language songs of the group they "stan" from memory.  As someone who has lived the last three decades in the US listening to American sports writers spouting borderline racist bullcrap about how "soccer" is really not a game for full-bloodied American boys, and film industry wags writing that Steven Segal movies always play well in Asia because they "don't have to read the subtitles to know what's going on," I would say this is a huge improvement for American cultural literacy.

Of course, as the K-pop industry becomes more and more successful and globalized, the shady side of its business-- human rights abuses of its young artists, sexual or otherwise, financial scams, drug problems-- is increasingly coming into the world's spotlight as well.  One of the three corporate giants, YG Entertainment, for instance, was hard hit by a drug-induced-rape and prostitution scandal involving one of its more successful artists, Big Bang's Seungri. Successively hit by other exposures regarding the company's mishandling and whitewashing of the problems of its artists, YG's head Yang Hyun-suk had to step down, although it is unclear whether the prosecution would be serious about getting to the bottom of the muck. Whenever these types of scandals blow up in East Asian societies, it tends to be the hapless artists and performers who get thrown under the bus by the powers-that-be and the politically well-connected. I wish I could be proven as overly cynical, but I am not holding my breath.

Another question that remains fascinating but potentially anxiety-inducing for the industry is the K-pop's ambivalent relationship with Japan.  It is no secret that a large portion of the (especially initial phases of) Korean Wave has been sustained by the Japanese consumers. Most K-pop artists still release Japanese-language albums and songs as a matter of course: it would be foolish not to, given that Japan's music market is about six times larger than that of Korea. Yet the K-pop's popularity in Japan has always been negatively affected by the downturns in political winds, often instigated by the leaders of both nations who clearly benefit from stoking hostilities of this kind (see, for instance, the Asahi TV's sudden cancelation of BTS's scheduled appearance in November 2018 following the discovery that a member once wore a T-shirt seemingly equating the "liberation" of Korea with the atomic bombing of Hiroshima: I might discuss this episode separately in a later installment, as this provides in my view an excellent teachable moment).  However, browsing the Japanese-language cultural news aside from those emanating from the mainstream media such as Sankei shinbun or NHK, one gets a strong impression that K-pop's popularity in Japan has not really declined as the latter media outlets claim.  In fact, many young Japanese girls and boys are actively familiarizing themselves with the Korean consumer/popular culture, learning Korean language not because they want to use it for career advancement but because it is "cool" (of course, the world in which any meaningful difference between these two-- "good for your career" and "cool"-- becomes non-existent is right there at the doorstep, or maybe even be already here).  Some even enroll in Korea-based training centers, dreaming one day to become internationally renowned K-pop singers (and indeed they have more than a few glamorous role models, most famously the beautiful and talented trio Myoi Mina, Minatozaki Sana and Hirai Momo of TWICE). 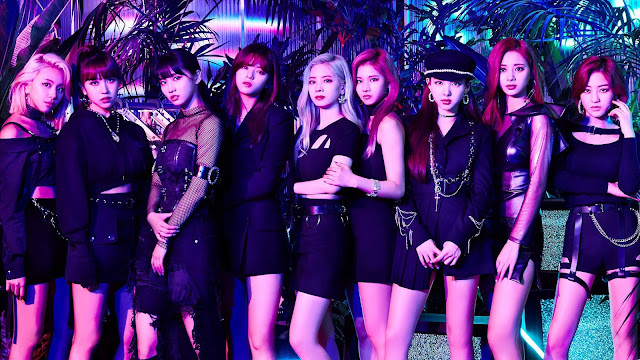 I was stunned to learn that, following the celebrated formation of the Japan-Korean hybrid girl group IZ*ONE, two members of the Japan's most popular "idol" group, AKB48, Takahashi Juri and Takeuchi Miyu, who had not won the televised competition for selecting members of  IZ*ONE, left Japan to start their careers anew as K-pop singers/idols.  In both cases, they had been the members of AKB48 for eight to ten years, frankly most of their teenage lives: they were willing to depart from such long-standing commitments to pursue their dreams in Korea.  Will this "reverse flow" of the talent eventually fade away, proving itself a temporary trend?  Only time will tell, but as an interested observer (in the sense that I am, unlike the majority of Korean men of my age group, an active listener of K-pop) I advise those in both sides of the Pacific not to underestimate the resilience and adaptability of K-pop.  K-pop or Korean cinema is not Republic of Korea: in fact, it has always been bigger than a mere nation-state, but now more so than ever (And kindly do not start mansplaining to me about the allegedly inherently exploitative nature of K-pop or Japanese idol industry. I am well aware of sexism, racism, ageism and other issues pertinent to the cultural sector. Why don't you try to help your female colleague/friend being caught in a MeToo situation and to fight homophobia, racism and discrimination against transgendered persons in your own sector-- academia, corporate world, medicine, jurisprudence? Frankly, there is so much stuck-up hypocrisy in the way Koreans-- East Asians in general, perhaps-- look down on the enter industry).

All right then, let me unfurl more of my observations and opinions through concrete reviews of select K-pop music videos, some popular, others not-so-popular. Let us begin with NCT 127's Simon Says and Stray Kids's Chronosaurus.
작성자: Q 시간: 오후 7:01