Q: Let’s talk about their stage performances individually, then, shall we?  First up is The Boyz’s creative adaptation of Taemin’s Danger, uploaded on May 14, 2020, the video of which is currently pulling approximately 2.83 million views (as of August 23. 2020: the full performance version is at appx. 2.1 million views).

A: This is an ambitious reinterpretation, as the original is done solo by Taemin, with back dancers.

Q: The intro is superb.  It is mysterious and pulls the viewers right in, along with the visually arresting imagery of a pocket watch swinging like a pendulum, and the members striking poses like mannequins, hiding their faces. 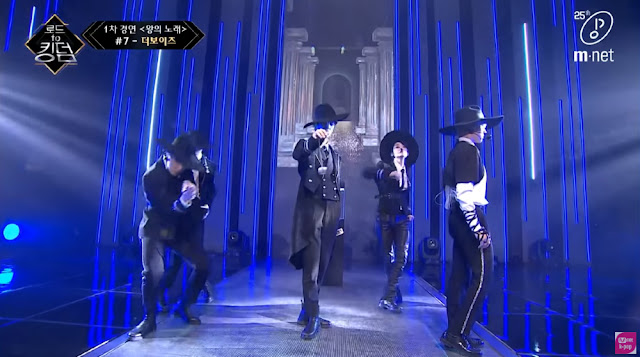 A: I feel that the idea of “phantom thieves” is much more clearly articulated here than in Taemin’s original MV.

Q: They seem to deploy the references to “Western” cultural tropes very well too.

A: The Boyz has some excellent English speakers among its members.  However, linguistic fluency is not the same thing as cultural fluency.

A: Kevin Moon (and also Jacob Bae) among the members is originally from Canada, and he contributes much to the English- or American-culture-inflected staging done by The Boyz.

Q: I wonder how much they had the control over the camera angles and movements?

A: I am sure the latter had been pre-coordinated with the choreography. No matter how elaborate and ingenious the choreography is, if the dance is seen only from the front, it could get boring.

Q:  Would you say that certain aspects of their choreography, such as use of hand gestures, are distinct from those of other boy groups?

A: Their choreography is certainly not like that of girl groups, who usually put a lot of delicate movements into their hand gestures (the opening of Twice’s Feel Special, or the ending part of IZ*ONE’s Secret Story of the Swan, for instance). Nonetheless, they make use out of most of their body parts in precise and intricate patterns.  Their dances could get insanely complex, but their synchronized symmetrical formations somehow never strike one as chaotic or confusing. 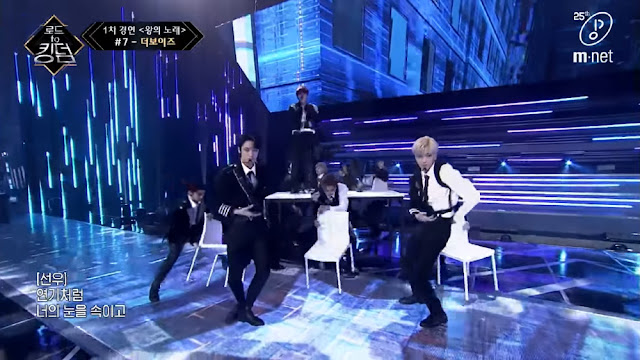 Q: Do you think The Boyz present the narrative or theme of their stage presentations well?

A: They were really the group with a consistent theme that ran through all of their presentations. Their performances of Danger, Reveal, and their final stage, Checkmate, were, for example, threaded through by the themes of the loss of kingship, its retrieval and new challenges to it.

Q: I think they understand the essential point, or core message, of the myth they are taking on much better than other teams.  Verivery’s reinterpretation of Mamamoo’s Gogobebe was well done, but its evocation of Aladdin and his magic lamp was really based on the Disney film, not the story of Aladdin himself in The Arabian Nights (which, according to some sources, was apparently a later addition to the collection with no evidence that an authentic Arabic text of the story had existed, not to mention that Aladdin was originally supposed to be a Chinese!). 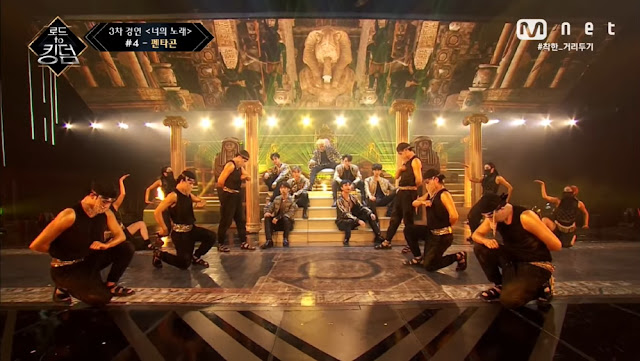 Q: Let us then look more closely into Pentagon’s performance of Monsta X’s Follow, uploaded in June 11, 2020, and currently (as of August 23, 2020) registering just under one million views (the full-length version records approximately 752 thousand views).  I happen to really like Monsta X’s original, and the changes Pentagon have made to both the music and choreography are intriguing.  The tempo has been slowed down considerably, which suits Pentagon’s current style. Hui also as usual showcases his great range as a vocalist not to mention virtuosity as a music producer-arranger.  Do you think perhaps he is too much of a dominant figure?

A: I think Hui adds a lot as a leader and a musical talent to the team’s identity.  It is in a way inevitable that he sometimes overshadows individual members, given his strong personality and emotional power he projects.

Q: Some leaders are like orchestra conductors, more concerned with how each member does with his or her instruments (vocals, dances, rap, etc.) and bringing them into a total harmony than his or her own performance, but Hui is definitely more of a lead singer of a band.

A: Yes, but it is also true that without him Pentagon would probably not retain its distinctive color.

Q: How about the choreography?

A: Some of the set pieces they put together for the Follow performance are quite terrific. The spreading-multiple-hands routine is actually very difficult to pull off.  I feel, though, that it and other set pieces are not as organically linked to one another as they could have been. 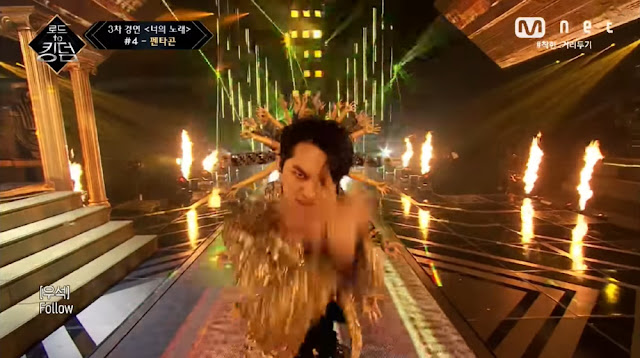 Q: Was there any concern about cultural misrepresentation or appropriation among international fans about the stage’s “Egyptian” motif, as much as Verivery’s Gogobebe adaptation generated?

A: I honestly do not know.  In the show, Hui and Yuto disclose a funny exchange about how the latter misheard “Follow” and “Pharaoh” and inspired the former to come up with this Egyptian motif, but I don’t know if that’s entirely true.  Perhaps the original song’s “Middle Eastern” flavor has possibly inspired Hui to go to that direction.  There is also good use of camera direction that appropriately highlight some members doing rap interludes and Hui’s high-note vocal performance.

Q: It is interesting at least for me to observe that Pentagon’s performance is as masculine and aggressive as Monsta X, yet somehow feels different in flavor. I mean, different types of masculinity and aggressiveness.

A: Pentagon’s is darker.

Q: Interesting you say that.  What would be a good word to describe Pentagon’s darker orientation? Resentment?  (Laughter) Maybe the French concept ressentiment, which was my choice for the translation of the Korean word han.

A: How about angst?

A: You have previously talked about Stray Kids in their songs like 19 and Chronosaurus the young people’s anxiety and trepidation as they are forced to grow up and become responsible social members. I think Pentagon’s songs and performances might project a similar but perhaps more distilled and focused sense of angst that resonate with many of their fans.

Q: I find interesting that Woo-suk, not Hui, sits on the throne at the end of the performance. Is there a hidden message that he is the future king?

A: Perhaps. I still feel that this was a very direct transition, from point A to point B, compared to what The Boyz have done throughout all of their performances, connecting all of them through a grand narrative of the kingship stolen and recovered.

A: I think they presented a solid performance. Their fans would be very pleased, but perhaps it has more of a cult appeal than something that could reach out to and convert non-fans into their devotees. 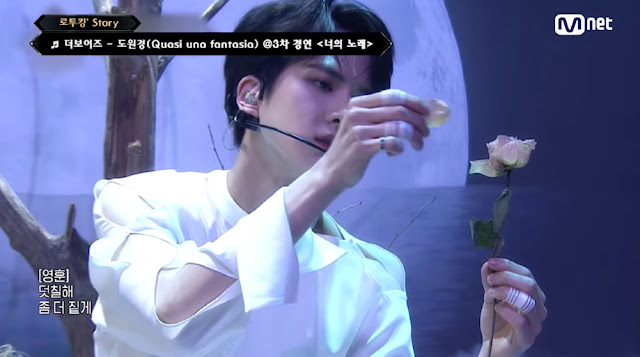 Q: Let’s then talk about The Boyz’s adaptation of VIXX’s Quasi una fantasia, also uploaded in June 11, 2020 (viewed approximately 1.4 million times as of August 23, 2020, while the full performance version records approximately 1.6 million views).  It is not as flamboyant as their version of Danger, but it is equally impressive in the sophistication of design and harmonious presentation with every member participating fully.

Q: Would you consider their version “feminine,” with the striking visual set piece in which each member transforms into a flower petal.

A: Hmm, I don’t think they are quite “feminine” in the traditional sense, although for sure their dance moves are sinuous, fluid and beautiful.  The Chinese traditional dances and the Korean fan dance come to mind as I look at them. Truth be told, Ateez and The Boyz, among other K-pop groups, have always embraced a wide range of sexuality in their MVs and stage performances.

Q: So have Monsta X, but the absence of, or perhaps more accurately, deviation from the Western sense of masculinity does not seem to affect their aggressivity.

A: True.  In any case, the formations are exquisitely worked out, without any enforced sense of rigidity, as in a military formation.

Q: The use of props, as usual, is ingenious.

A: Yes, the flowers gradually blooming, expressed through a dolly movement of camera over the group members dancing with different versions of a tree branch, for one.  This is my choice for the most beautiful performance put together throughout the whole Road to Kingdom show of this season. 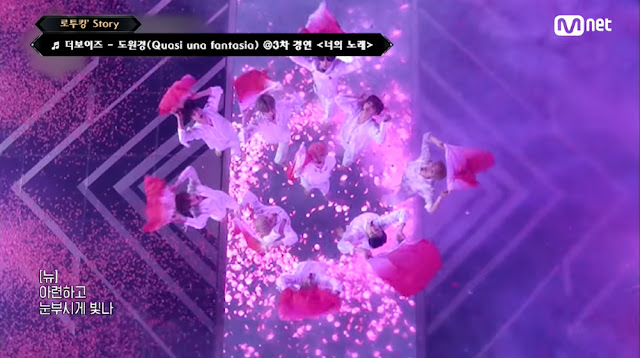 Q: I almost wish that The Boyz could put up a stage musical, or even a musical film that simply takes the old and new kings and the “growth” motifs they had deployed throughout the show and fleshes them out into a straight narrative.

A: That would be legit fabulous.

Q: Well, thank you so much for this highly entertaining and educational conversation.  I hope we can come back for more discussions of various aspects of the contemporary K-pop, visual, performative and musical, the whole pizza, crust, cheese, toppings and all.

A: You are most welcome, Professor!