Ms. Jang has graduated from Ewha Womans College and recently completed MA program in Demography and Social Analysis at University of California, Irvine. Her MA thesis, “Gender and Marriage in Neoliberal Capitalism: A Case Study in South Korea,” won the Best Paper of the Year prize: she is currently preparing for a Ph. D. degree.

Kim Ji-young, Born 1982 depicts various aspects of discrimination and violence against women. This book goes over the life course of its main character, Kim Ji-young, in its each phase as she ages: as a daughter, a student, a worker, a wife, and a mother. In the early years of her life, her brother always was given a priority at home only because he was a boy. Then, when she went to school, boys were allowed to be rude to girls and do everything first, such as standing first at the food distribution line for school lunches. As she grew older, daughters of low-income families were pushed into factories so as to enable their brothers to be educated. Subsequently, female students were persuaded to choose “feminine” majors because they were expected to take care of the family once they marry. Companies, similarly, prefer male employees because women ought to put their family in front of their careers. A woman experiences a career break once she has a baby because the company does not provide any support for childcare. But at the same time, a stereotype persists that women who sacrificed their careers have made little contribution to society. The sad thing about this book is that my mother, born in 1962, and I, born in 1995, have had strikingly similar experiences with those Ji-young goes through in the book. In other words, the Korean society has not changed significantly in terms of its treatment of and expectation from women in the last three decades. Furthermore, we now know that women across different countries are resonating and feeling sympathy for Ji-young’s story. 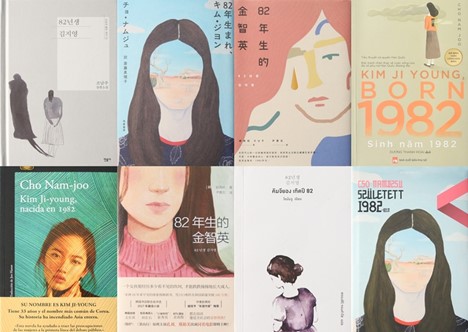 The popularity of this book in South Korea and other nations shows that those frustrating experiences described in the book are almost omnipresent across divergent cultures and geographies. An English version of the novel is ranked at 12,000th among all books sold at Amazon.com: in Amazon Japan it is the ranked first among Asian literature publications (as of July 20, 2020). Why is this book so popular? How did this book win sympathy so widely?

First, Kim Ji-young does not have a specific characteristic. This lack of particularistic features implies that the story told in the novel encompasses everyday lives of many, if not all, women. A lot of books convey the personality of the main character by describing how he or she looks like. This book does not do that. Even the book covers usually deletes the face of Kim Ji-young as Figure 1 illustrates. If Kim Ji-young was an exceptionally beautiful or conversely a “plain” woman, the stories in the book could only represent the life of that particular woman. Kim Ji-young’s anonymity in a way enables most women readers to identify with and feel sympathy for her.

Also, extreme episodes do not occur in the book. Main characters of many books that criticize the discrimination against women experience exceptional tragedies. Kim Ji-young is never subject to any severe form of violence. The only overtly criminal incident in the book involves a male student who stalks and threatens physical harm to her teenage self. But in the end, she is okay. Her father and husband love her, and the other male characters also tend to act reasonably. However, as one reads through the book, the reader feels that something is wrong. The social environment subtly pushes Ji-young and other female characters toward the lives that they did not initially dream of living. For example, Ji-young and her sister both give up their career aspirations to become mothers. No tragedy was needed to change their minds. At the time they had made those decisions, they appeared to be the only and the best option available to them. The consequences are also “normal.” Their experiences as mothers are what we (South Koreans) can see all the time around us. Nonetheless, we can feel how those are choking the women. I think banality of Ji-young’s story really is a key to the power of this book. The book shows that most mundane experiences force women to sacrifice their lives for their brothers, husbands, and sons.

As much as this book was loved by many readers, it was also subject to vilification and condemnation. Irene, a member of the famous k-pop girl group Red Velvet, was widely criticized by publicly mentioning that she had read the book. Why do some people blame her for reading the book? I believe it is because that the novel, in the critic’s minds, implies that all South Korean males, including the most exemplary and generous ones, are in fact perpetrators of injustice. The book does not have a villain who specifically aims to ruin Kim Ji-young and other women’s lives. Even the stalker and the male teacher who sexually harasses female students are not exceptionally wicked. Instead, some characters such as Ji-young’s father and husband seem to be good persons. However, they still end up contributing to Ji-young’s mental breakdown.

In the denouement of the book, the psychiatrist, to whom the book’s contents were narrated, seems to feel sympathy for Ji-young. However, apparently without any further thought, he goes on to state horribly discriminatory things against married nurses, and he does not take any action to stop her intelligent wife from losing her career due to childrearing obligations. The lack of separation between good and bad male characters suggests that the everyday actions people take can contribute to the solidification of structural discrimination against women. The male readers may feel like they are blamed for their ordinary, everyday actions that they feel are not malicious or badly intended, which explains some of their negative reactions to the book.

The cycle of discrimination inside and outside the home

Among many episodes in the book, what especially caught my attention were the interconnections among Ji-young’s experience as a worker, as a wife and as a (potential) mother. Women are expected to leave the work once they marry, so they are paid less and their jobs are harder to hold down. At the same time, as a result of their low salary and job security, they are chosen as caregivers within the family. However, Korean society does not recognize her social contribution as a caregiver. Mothers are sometimes vilified as “mamchung (mother-roaches, “infesting” public places with their loud, uncontrollable children in tow, to follow the excellent English translation by Jamie Chang).” It was painful for them to give their career up, but many Koreans think that they are wasting their time at home. So, women’s experiences at home and work reinforce one another in a vicious cycle: women cannot find a good job because she will one day become a mother and leave the company, but at the same time, they would be the one to give up their career in the family once the time comes because the male partner is more likely to have a better job.

I had to question how we can escape from this cycle. Some feminists today in South Korea argue that women should not marry and should not have a child under these circumstances. Can this be a solution? A low fertility rate is compelling the South Korean government to look for a way out of this cycle. Still, so far, they do not seem to understand the fundamental issues underlying the phenomenon. The government has been merely blaming women for the low fertility rate, rather than trying to understand why women choose not to have children. The real solution, I am afraid, is acknowledgement of structural discrimination against women that cannot be blamed on “bad behaviors” of certain men, and to find ways to dismantle it. The private and public sector should both change to deal with gender discrimination. First, companies should stop viewing women as temporary workers bound to quit their jobs once they marry and provide them with continuous opportunities to work even after marriage. Also, systemic support is needed to coordinate division of labor within the family and release working mothers and wives from the double burden. Equal shares in house chores and childrearing should be normalized culturally. Only when these two issues are properly addressed, in my view, the discrimination in the domestic as well as public sectors will stop reinforcing each other.