Well, my friends, here we are, four years later. You can go back and read my old blog entry entitled “Preparing Myself for a Donald Trump Presidency.” This is the conclusion to that entry: “From November 8 [2016] on, whatever the result of the election is, all you arrogant white male Americans who condescendingly looked down on Japan, Germany, Italy, South Korea and other nations and disparaged their ‘inability to grasp the essence of democracy’ or some such American Exceptionalist crap, stop bullshitting to my ears. American democracy is DISEASED. The young ones are probably up to the task of curing it but meanwhile, kindly stop telling me how ‘great’ American democracy is, while allowing the low-grade charlatan like Trump to become the head of its executive branch. There is nothing ‘great’ about the American system that allows this to happen.”

This was uploaded a little past midnight of November 8, 2016, pretty much what I am doing right now in 2020, composing this blog entry about half an hour into the new day of November 3. If you are living anywhere in the world, and reading what I have written, you darn well know what has happened in the last four years, and no, I still derive no pleasure whatsoever from being able to say, “I told you so.” If anything, I fervently wish I could go back to that timeline in which Donald Trump had not only been defeated by Hilary Clinton, but in which he simply had not existed at all: not as a host of The Apprentice, not as a con artist businessman, not as anything.

But the stone-cold reality is that the US (and the world, really) has been ravaged by the most incompetent, self-centered, unempathetic, dishonest, rampantly racist and chauvinist POTUS in modern (perhaps entire) US history. In addition to all racist and white-supremacist forces, behaviors and ideas he actively fostered, promoted and encouraged, all immigrant children and families he destroyed by putting them in dog cages, all foreign policy behavior that openly benefitted dictators and tyrants and alienated democratic allies, and all institutional fail-safes for environmental protection and conservation that he dismantled, he has literally treated the COVID-19 pandemic as if the latter was his ratings competitor. He publicly called CNN journalists who covered the coronavirus “dumb bastards” to the delight of his “supporters:” he seems to think that his mission as POTUS of the US is to ensure that his crazy antics and hatemongering gets more media coverage than COVID-19 deaths and destructions.

The last time I checked, whatever the fucked-up country he is apparently the executive head of has recorded 236,473 deaths from the deadly virus. My old country, South Korea, has had 468 deaths, even though these two countries had first become aware of the pandemic almost at the same time. For those, including those false-equivalence experts in the “left,” who say “well, at least Trump has not killed civilians in a war with a foreign country,” what do you think these COVID deaths amount to? This guy waged a war against his own countrymen, and, not ironically, including a large chunk of his fans and supporters. Get out of your ideology bubbles, will you?

I could go on and on about how this orange-colored maggot has damaged the institution of American presidency and torn apart the fabric of American society into shreds, much of which semi-permanently, so that “recovery,” even if possible, would take years on end. But why bother? I am not writing this piece in order to rant about him.

In 2016, I wrote the entry to renew my resolve about surviving next four years under this man, without losing myself to despair. To my surprise, despite having witnessed so much suffering and agony in the intervening years, I have not lost myself to despair or even cynicism. In fact, the message I want to convey to my readers, primarily my students, mainly Americans but not necessarily only Americans, is that of optimism. I want to reassure you that whatever happens 24 hours from now (or perhaps for days on end until we know the final tally of the votes), things will not remain the same: it will not be the repeat of the same dreadful four years.

Why am I so confident? Because while I was weathering through the last four years, I was reminded that this had all happened to me before. It had specifically happened when I was a young kid growing up in South Korea. South Korea had toiled under the military dictatorship of that shade-wearing serpent Park Chung-Hee for whopping seventeen years. And when Park was assassinated in 1979, an even coarser and crueler strongman took over in 1980 and ruled the country for several more years under his jackboots. No matter how you cut it, you, young ones in the US, could do so much more than we young South Koreans could then.

Besides, the COVID-19 pandemic has truly upended the world. It has mercilessly exposed the fault lines of the so-called “developed” countries of Europe and the US. Some of the most horrifying and nightmarish stories related to the pandemic I have ever read so far are from Sweden, where the “herd immunity” experiment has spectacularly failed. Italy and France went though some horrific experiences.  Anti-Asian racism skyrocketed, even in Germany. The US government, under the leadership of a charlatan and a con artist, who knows nothing about nothing, has floundered and crashed around in its dealings with the pandemic. What’s that, the size of economy matters, hmm, like China and the US? Sure, unless that big-size economy is being “managed” by a bunch of incompetent idiots. When the coast is clearer, it would be obvious to all concerned that the relative advantages of so-called “developed nations” are just that: relative.

And this is not a recipe for prolonged misery and despair. No, this is a recipe for optimism and hope. Let Donald Trump manipulate and cheat his way to Second Presidency if he wants to. What the past four years have shown is that men like him are utterly incapable of showing the world what the future holds, and to point toward that future, even if every atom of their being depended on doing so.

The COVID-19 pandemic will be with us for the foreseeable future, so will all the difficulties associated with it. But the miseries and pains it has brought us have also torn away some of the façades and veils that have hidden some hard truths from us.

I will not lie to you and say it is going to be easy. Whatever happens tomorrow, you will have to learn to patiently work at rebuilding this country, face its now-exposed, ugly and festering truths, and address its centuries-old sins and hypocrisies, exploited by men like the current POTUS like the flies buzzing around a chunk of rotten meat. But even if the path is filled with thorns, it is going to be a clear path, with the bright light illuminating it.

It really comes down to two choices, two ways of looking at the world at this moment: one of despair, believing the men like Orange Maggot will forever manipulate and fool us, and ultimately conceding them power to treat us as they like. We Are the Losers theory. Another one is that, even though they could momentarily and sometimes even for a considerable duration arrest our progress toward the future, they ultimately will end up as losers of history. They Are the Losers theory. And I implore you to choose the second one.

Go out there and change the world: engage, discuss, agonize, educate yourself, and vote. Don’t say your action or thought doesn’t matter. Donald Trump does not matter. You do.

Let me leave you with a quotation from a speech by a young man named Kim Nam-jun, with whom I can honestly say I am proud of being a citizen of the same country.

"Maybe I made a mistake yesterday, but yesterday’s me is still me. I am who I am today, with all my faults. Tomorrow I might be a tiny bit wiser, and that’s me, too. These faults and mistakes are what I am, making up the brightest stars in the constellation of my life. I have come to love myself for who I was, who I am, and who I hope to become."

Look toward the future. It belongs to you, not to the Orange Loser. 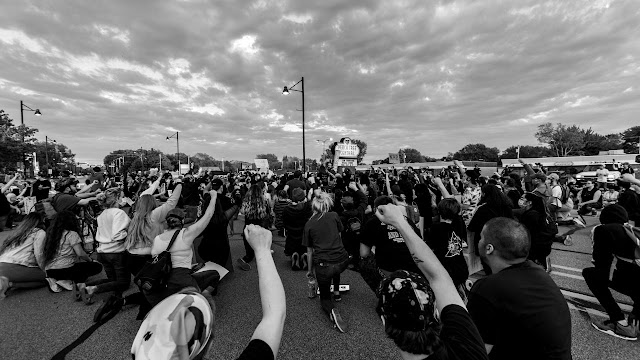