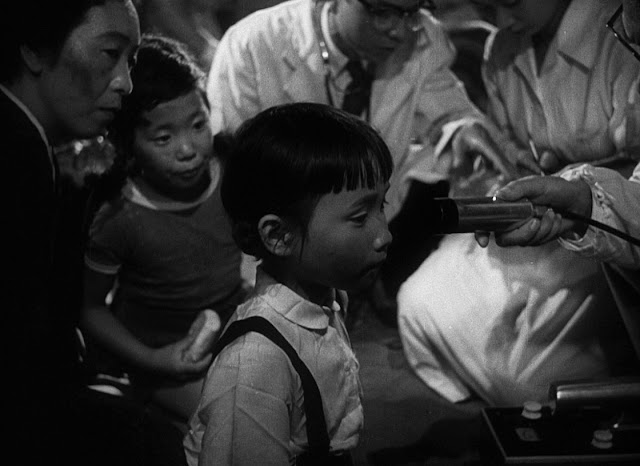 The veritable King of Monsters, Godzilla, who has survived more than sixty years of countless incarnations, pastiches and parodies and somehow maintained not only its elder statesman’s dignity but also relevance, is one of the best-known symbols of Japan in the contemporary popular cultural lexicography. The most recent effort to revive the radioactive-flame-breathing mutant dinosaur as a viable global franchise has had mixed results (FYI, I liked the first Godzilla [2014] directed by Gareth Edwards and was hugely disappointed by its 2019 sequel, which seemingly compressed the process of the jeuvenilization and trivialization the character had gone through in the hands of Toho from 1954 to 1976 into one single movie).  I would argue that the crude and thoughtless way in which Godzilla was decoupled from its original historical context— its symbolic meaning as a representation of nuclear destruction as well as its specific historical position in the reckoning of the trauma of Pacific War for the Japanese— at least played some roles in the failure of the sequel to generate the sublime frisson that the black and white original still inspires among many viewers (and the Edwards remake at least aspired to emulate).

In the 1954 original, Godzilla, here referred to as Gojira in deference to the original Japanese reading of the beastie’s name, replicating the narrative strategy used in the more astute monster films such as Them! (1954), does not show itself until approximately 20 minutes into the movie. The Japanese viewers at the time of release would have instantly recognized references to their wartime experiences, still quite fresh in memory (at one point, a character in a resigned voice complains, “Rats, we have to evacuate from the city again!”) as well as topical events. We see, for instance, a group of fishermen scooping off a bizarrely mutated school of dead fish, and commercial ships destroyed by an explosion of blazing light and heat from under the sea. These are unmistakable references to the real-life incident involving Fukuryu-maru (Lucky Dragon) No. 5, a Japanese fishing ship irradiated by an American hydrogen bomb experiment at Bikini Islands in 1954, creating an international scandal and anti-nuclear protests.

The somber, semi-documentary tone of the film is never really broken, as  Paleontologist Dr. Yamane (the head samurai from Kurosawa Akira’s Seven Samurai) and other members of the investigation team painstakingly compiles the available evidence to deduce that the culprit is an overgrown prehistoric behemoth, possibly awakened and mutated by a nuclear detonation experiment.  Nicknamed Gojira after the legendary sea beast in a folk legend, the monster makes its first startling appearance menacing Dr. Yamane, his daughter Emiko and her stalwart and idealistic boyfriend Hideo straddling a hill.  Even though it is essentially a hand-manipulated puppet, there is not a shred of cartoonish anthropomorphism in the monster’s utterly inhuman roar (a truly innovative sound design, along with the booming thump referencing the creature’s stomping gait), and the terrific reaction shots of Shimura Takashi, Yamauchi Momoko and other actors, directed by Honda Ishiro, convince the viewers of the fantastic terror and awe of encountering such a beast for real. 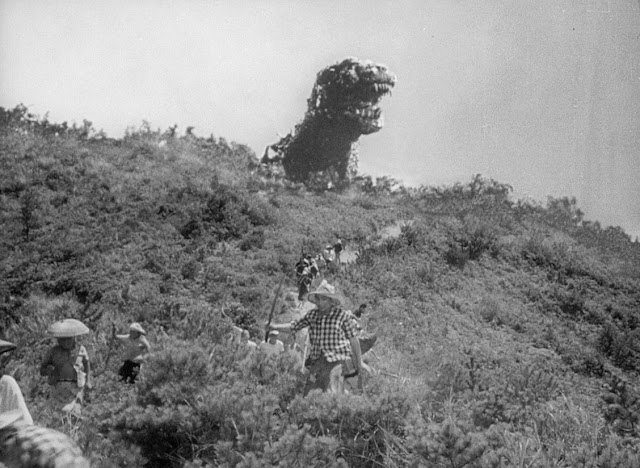 This inhumanity of Gojira is highlighted in the film’s depiction of its deliberate, purposeful advancement into the Tokyo metropolis, one of the great sequences in the canons of Japanese fantastic cinema. D.P. Tamai Masao (Naruse Mikio’s favorite cinematographer, responsible for Late Chrysanthemum [1954] and Floating Clouds [1955], among other films) and special effects expert Tsuburaya Eiji deftly manipulate fragmented glimpses of the parts of Big G’s body—a tail seen from a high-rise window, a massive foot crushing a train— or of its silhouetted bulk looming high in the dark sky, creating an expressionist montage of an otherworldly terror, far beyond that of a mere gigantic animal rampaging through a pile of mock-up buildings. The sequence has a nightmarish quality that feels both authentic and fantastical, almost like a silent film footage of a real-life disaster, such as Hindenburg exploding into balls of fire.

Dr. Yamane opposes the government plan to destroy the monster, believing that its biological resilience has to be studied for the benefit of mankind.  However, Dr. Yamane's daughter Momoko and her boyfriend Ogata believe that the monster has to be destroyed.  Seeing the devastation of the city for herself, Momoko confesses to Ogata that she believes that there is one way to destroy Gojira.  She tells him that Dr. Serizawa, a genius chemist who had once been betrothed to her, invented a frightful agent called Oxygen Destroyer, which liquefies and annihilates all living beings in water.  Dr. Serizawa, perhaps the best-known role for the aristocratically handsome Toho regular Hirata Akihiko, is disabled, embodying the traumatic wounds of the war (and devotion to science, providing a linkage to the postwar national ideology as well) like the returning soldiers from the war. His agonizing dilemma, having invented a terrible weapon that could destroy Godzilla (i.e. supersede nuclear warheads in power) and yet reluctant to use it for fear of having it fall into the wrong hands (i.e. the contemporary national governments), provides the moral and intellectual linchpin for the film. 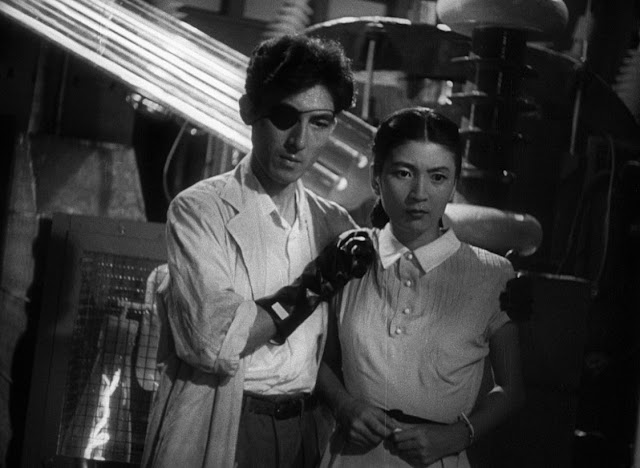 The ultimate destruction of Godzilla is thus never played for the exhilarating drama of human ingenuity and dedication triumphing over a threat to mankind. Instead, the somber, elegiac mood of the film reaches its crescendo as Dr. Serizawa buries the secrets of Oxygen Destroyer along with himself and the hideous, skeletal remains of Godzilla in the depth of the ocean. With Ifukube Akira’s sad, beautiful music playing in the background, he is mourned by his friends (the Yamanes and Hideo) and, symbolically, the postwar Japanese community who, as specified in the Peace Constitution, consciously chooses not to go into a potentially Apocalyptic war (i.e. militaristic “victory” against the “foreign” threats like Godzilla, although it could be potentially justified for the most stringently defined form of “defense”) despite having developed technological acumen to create weapons needed to conduct such a war.  The noisy and irritating presence of Americans (including a “Japanese-American” character, a borderline caricature) in Shin Godzilla (2017), an otherwise thoughtful and well-made feature, provides an interesting contrast to the absence of Americans in this version.

Can It Be Used in Class?: Gojira has endured as one of the classic cinematic achievements of Japan, quite aside from the global popularity of its central monster in the subsequent decades. It is still one of the most useful motion pictures to stimulate student discussions and reflections on the history of twentieth-century Japan, especially since many of those familiar with the contemporary iterations of Godzilla might not be aware of the film’s serious, documentarian approach to depiction of traumas of the Pacific War and its stark, honest portrayal of the political and moral dilemmas faced by the immediate postwar Japan. Students can be made to reflect on many scenes and sequences that specifically draw comparison between Gojira and the Pacific War experience, especially B-29 air raids and nuclear bombings, some of which were retained and others eliminated in the process of re-editing that resulted in the Americanized version Godzilla: King of the Monsters (1956) with the American actor Raymond Burr inserted (rather cleverly, I must add) into the narrative, as if he is a first-hand witness to the unfolding of the plot in the original version.

If Gojira is a parable about nuclear weapons, what is the position of the filmmakers?  Also what do you think about the positions of different characters (say, that of Dr. Serizawa versus that of Ogata)?  Finally, what can you tell about the Japanese society of 1950s that you were previously unaware, by watching this film?  The topics you might consider include: Position of women, democracy as it is conceived by the immediate postwar Japanese, good and bad aspects of technology, and absence or presence of “foreigners.” 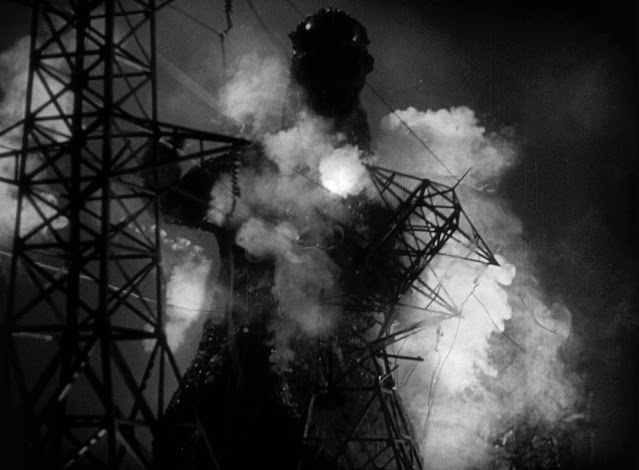 As for supplementary readings in English language, I have used Igarashi Yoshikuni’s discussion of the early Showa-period Godzilla films along with the NHK series Kimi no na wa (What is Your Name?) and the stardom of the pro-wrestler Rikidozan in his Bodies of Memory (2000). Those who prefer a work more Godzilla-centric might choose William Tsutsui’s Godzilla on My Mind (2004). The latter provides a nice rundown of both Showa and Heisei-era Godzilla films (from 1954 to roughly late 1990s), distilling some constant motifs and themes throughout them, more important among them Japan’s ongoing anxiety regarding remilitarization and ambivalence regarding its position vis-à-vis hostile international environment.  One caveat I have about the book is Tsutsui’s interpretation of Kaneko Shusuke’s Godzilla, Mothra and King-Gidorah: Giant Monsters All-Out Attack (2001): he seems to attribute nationalistic intent to the film’s imagery of Godzilla, but my interpretation is quite different.

Currently the best way to watch Gojira stateside is through the Blu Ray special edition restored by Criterion Collection in 2012. This edition was subsequently released as a part of Criterion’s complete Showa Godzilla collection in 2019. It comes with the US import version Godzilla: King of the Monsters, also restored and actually looking and sounding better than the original. The new commentary, historically informative and enthusiastic, is by David Kalat. It is chock full of archival and new video interviews with actors, technical staff, composer Ifukube Akira and the major critic Sato Tadao.  One interesting addition is Columbia University professor of Japanese history Greg Fflugfelder’s audio essay on the terrible fate that befell on Lucky Dragon No. 5, entitled “The Unluckiest Dragon.”  J. Hoberman contributes an essay in which he argues for Gojira as a successful case of humanizing, for all its ambivalent political meanings, the unthinkable, much in the line with Igarashi’s analysis. 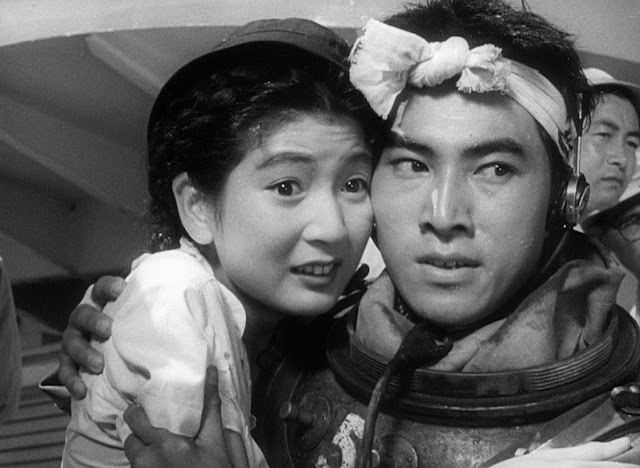